For the wide audience, scandalous divorces often turn out to be not less interesting than their brilliant weddings. 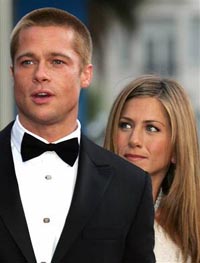 Not long ago, a Hollywood couple of Jennifer Aniston and Brad Pitt ended their marriage. After it happened on October 2, 2005 the couple began to divide the property. Their common fortune made up $200 million by the divorce moment. The couple got married July 29, 2000 and divorced after five years of marriage because of irreconcilable differences. After the divorce, Jennifer got a $9 million house in Malibu, California, that the couple owned. Brad got the controlling interest of the Plan B producing company which market value now equals over $50 million after the production of Troy (2004) and Charlie and The Chocolate Factory (2005). The company is now working on 12 more promising films with popular movie stars.

Their 10,000+ square foot Beverly Hills home has been placed on the market for $28 million. The home was designed by Wallace Neff for actor Fredric March in the 1930s. It took the couple three years to repair and furnish the house but they lived there just less than two years. It was really difficult to sell the house for the stated price and the couple had to reduce the price to $24.95 million. After the sale, Jennifer and Brad got equal portions of the sum.

The ex-couple also had to divide an apartment in New York, several cars including a $126,000 Mercedes, bike Ducati for $63,000 and a yacht for which Aniston and Pitt paid $5.7 million.

Another fabulous couple, Nicole Kidman and Tom Cruise, filed the most scandalous divorce Hollywood ever saw. They got married on December 24, 1990 and divorced after ten years of marriage on August 8, 2001. By the moment of divorce, the couple had a fortune of $450 million, but it took Nicole much scandal and court hearings to get some part of it. The actress got a $4.3 million mansion in California that she soon sold for $12 million. She also got a house in Sydney where Nicole is living now. Also, she got $30 million in cash and joint guardianship of the couple’s adopted children Isabel and Connor.

After the divorce, Tom Cruise got houses in London and New York and a $10 million chalet in Telluride, Colorado. The actor also got three airplanes, one of them amounting to $32 million. Cruise faced some problems when he wanted to change the airplane’s number N55KC (the last letters meaning Kidman-Cruise) for N808T in Tom’s honor. The Federal Office of Civil Aviation reluctantly changed the airplanes number.

After about thirteen years of marriage (from November 21, 1987 to October 18, 2000 ), the most glamorous couple in Hollywood Demi Moore and Bruce Willis divorced. Their divorce is still called the most peaceful one among Hollywood celebrities. Bruce implicitly paid $90 million in cash and gave Demi a $7.5 million mansion in Idaho and a $2.5 million house on the ocean shore in Malibu that the couple owned. It was decided once and for all that their three daughters would live with the mother, but Bruce has the right to meet his daughters any time and even take them to live in his house.

Brucegot an apartment overlooking the Central Park in the center of New York and a $1 million Victorian style house in Man. Demi and Bruce have the right of joint guardianship of their daughters. Bruce does not pay any legal maintenance; he just gives Demi and the girls enough money as if they are still living together. The ex-couple pay together for the girls’ education, their medical insurances and other spending.

The marriage of Steven Spielberg and Amy Irving (married on November 27, 1985 and divorced February 2, 1989) is called the most expensive one in Hollywood. Amy got $100 million which makes up $150 million taking the inflation rate into consideration. The record has not yet been broken by any of divorcing Hollywood stars. It was thanks to Irving’s lawyer that she could get this big sum. The lawyer proved that when marrying, Amy had no personal lawyer to register an agreement of marriage. The agreement was registered by Spielberg’s lawyer and thus it was later declared void. So, Amy got half of her ex-husband’s fortune. Besides, Steven also gave his wife a painting by Monet that they bought being a married couple.

Steven got $100 million and joint guardianship of his son Max who was four years of age by the moment of divorce. Spielberg also retained the house where he lived together with Amy.

After six years of marriage (from September 2, 1997 to October 29, 2003 ) to Jude Law, Sadie Frost went through more than two years of quarrels, disputes and threats to seize half of the ex-husband’s fortune. As a result, Sadie got $10.8 million instead of the demanded $18 million. Besides, Jude now pays Sadie $45,000 monthly. The payments will be stopped as soon as Sadie gets married again. The actor also gave his ex-wife a $9 million house in London’s prestigious part that the couple bought right after the marriage. Instead of the legal maintenance, Jude pays for studies of their children, their medical insurances and babysitters. After the divorce, Jude got an apartment in the center of London and joint guardianship of his three children, two sons aging 10 and 3.5 and a daughter aging 5.

Apart from the scandalous and expensive divorces stands the most nonsensical divorce of Eminem and Kimberley Scott. They got married on June 14, 1999 and divorced on October 11, 2001. Kimberley got a check to the sum of $475,000, the guardianship of the daughter and maintenance. But instead of the annual $142,800 recommended by the court, Eminem agreed to pay just $52,000. Besides, the hip-hop star had to pay his daughter’s medical insurance. Eminem got a $450,000 house in the suburb of Detroit where he lived with Kimberley and joint guardianship of daughter Hailie Jade. It was decided that the girl would live with the mother, and Eminem had the right to visit her any time. When Kimberley was declared guilty of taking cocaine and sentenced to three months of compulsory treatment, the musician demanded that the court must deprive his ex-wife of the parental guardianship but in vain. This may sound incredible, but the couple remarried January 14, 2006.