Gosha was born two years after his father’s death, thanks to the latest medical technology and the burning desire of Ekaterinburg teacher Ekaterina Zakharova, who lost her son, to have a grandson. “He really is a unique baby,” says Sergei Balezin, an embryologist at the Ekaterinburg centre of family medicine, where Gosha was “conceived”. “We were the first in the world to use a combination of four methods: post-human reproduction (this centre carried out a fertilization after the donor’s death for the first time in Russia ), transportation of living material from another country, conception in a test-tube, and a successful surrogate maternity…That combination would not have been permitted in the West.” 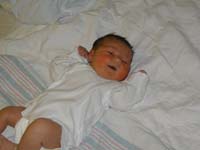 The unique three-month old child still has no documents. He has not been registered at the Civil Registry Office: according to Russian law such a child cannot officially exist, and he should not therefore have a grandmother. His father died before he was born, the identity of his mother is unknown (the egg cell of an anonymous donor was used) – in that case they cannot register the name of his dead father, and the mother is considered to be whoever gave birth to him, even if she did not pass on a single chromosome to the child. His birth grandmother, as a result of whose superhuman efforts the baby was born in the first place, is constantly afraid that the child will be taken away from her. Such fears appear justified, as the Civil Registry Office has taken her to court.

In Russia legislation on reproduction simply does not exist. “We carried out the medical part,” say the doctors. “There was nothing to prevent us from doing that. But our clients sort out the legal questions independently. We don’t know how to act in a case like this, as there just haven’t been any such cases before.” We are at least ten years behind the West on this issue.

These questions are dealt with differently around the world, according to the biomedical and religious environment in various countries. Catholics have a very harsh view on this issue: in Italy, for example, in vitro fertilization is prohibited, which gives rise to so-called reproductive tourism, with Italian women besieging Moscow clinics (of which there are now fifteen). In Australia the same ban has been imposed in several states. In Great Britain cryopreservation is allowed, but it is forbidden to carry out in vitro fertilization on the territory of the country. The most delicate issue concerns post-human reproduction. In Germany this is entirely forbidden. In the USA a donor must give his definitive permission, either in his will or aurally in the presence of many witnesses, and at least a year of mourning must pass before the procedure may be carried out. In Israel a court gives permission for this kind of operation.

The case of the first Russian baby to come into the world after the death of its father will now be decided by the court of Upper Pyshma on the outskirts of Ekaterinburg. “I think that the court will reach a positive decision concerning the adoption,” says Liliya Shakurova, a specialist in the custodial department. But for the time being little Gosha remains without an official name, patronymic, and a grandmother.