For many decades, the confrontation between the US and the Soviet Union was unprecedented, and citizens of both countries considered each other a foe. At that, the US and the USSR were never at war with each other. What is more, a couple of centuries ago Russia and America were keeping rather friendly relations. 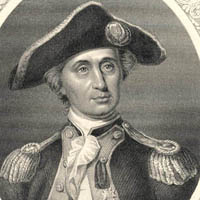 On April 25, 1788 Russia’s Empress Catherine II received American citizen John Paul Jones in her out-of-town residence. In an hour and a half the first captain of the US Navy left the residence having the rank of a Russian Navy rear admiral. Later, he told his friends in Paris that the Russian Empress had received him warmly which flattered him as a foreigner.

In twelve days, John Paul Jones was in Russia’s Ochakov. He had to ride for ten days. Jones took to riding when learned to be a cowboy at his brother’s ranch in the US. The Russian military intelligence was closely watching Jones’ brave deeds within nine years with the hope that the hero would serve the Russian Empire.

Click here to see the photo gallery of the naval history

John Paul, and this is the name of the Russian Navy admiral given to him by birth, was born to the family of a poor gardener in Scotland. John did not want to follow his father’s steps and left home at the age of 13 to become a sea cadet. By the age of eighteen he was captain’s third mate and became captain’s first mate by the age of nineteen.

It was very prestigious to be a sailor in Great Britain in those times. But Jones did not like shipping black slaves on the brigantine Two Friends. He joined the Royal Fleet at the age of 28 and soon became a captain. Once it happened so that Jones killed a son of some official at a rebellious ship, and the British Justice put him on a wanted list.

So, John Paul offered his service to the USA that was waging the Independence War with Britain. The US Congress accepted Jones’ sword, conferred the rank of First Lieutenant to him and made him the captain of flagship Alfred.

Soon, Jones captured sixteen British merchant vessels and brought them to Philadelphia. In 1776, in corvette Ranger Jones left for the British shores. At night, he landed troops in the port of Whitehaven and burnt down all vessels in the haven. When returning, he seized frigate Drake. In two months, he repulsed a caravan of forty British merchant vessels. Once, Paul Jones visited the county of Selkirk where his crew stole all silver of the noble family. Paul Jones had to compensate the cost of the silver to the Selkirks to his dying day.

In October 1777, he delivered ammunition and food to besieged troops of George Washington in New York. Washington’s troops held out thus determining the subsequent success of Americans. Soon, the Congress decided to send Jones to Europe in the frigate Indian to inform US Ambassador to France Benjamin Franklin about the triumph: October 17, 1777 Americans encircled and captivated the British army near Saratoga.

In 1779, Paul Jones did his most famous deed at sea. In the ship Bon Homme Richard at the head of the French squadron he met the British frigate Serapis and the sloop Countess Scarborough on September 23, 1779. During the battle, other vessels of the squadron abandoned the flagship, and Bon Homme Richard had to accept battle alone. After three hours of the battle, the vessel lost all of its guns and half of the crew. When the British frigate suggested Paul Jones must surrender the latter pronounced the phrase that made him really famous: “I have not yet begun to fight!” When Bon Homme Richard began to sink all sailors together with Jones boarded the inimical vessel and defeated the British sailors in hand-to-hand fighting.

The deeds of the former British crown subject made King George III furious. The British threatened to hang the Scot twice: by the head for killing and by the feet for disgrace.

The Congress conferred the rank of First Captain to PaulJones while the captain was dreaming of the admiral rank only.

Soon after that Jones left for St.Petersburg. At that time, the Russian Empire was waging war against Turkey and needed Navy experts. Russian Commander Alexander Suvorov warmly received the US Navy founder. Before a battle with Turkish admiral Hassan, Jones got the battleship Saint Vladimir made in Kherson. When Jones joined Russia’s Cossacks, he changed his belief for Orthodoxy.

A battle with the Turkish Navy on June 17, 1788 was really severe and ended in triumph of the Russian fleet. Russia scored many victories under the command of Jones afterwards. Rowing boats commanded by Paul Jones managed to seize the fortress Ochakov.

But soon intricate intrigues were woven against the foreigner in Russia, and Catherine recalled Jones to St.Petersburg. The Empress offered Jones to lead Russia’s Baltic Fleet. The St.Petersburg elite received the brave hero with much admiration; he was welcomed by the best families of the city. But there was still no appointment to the post of the Baltic Fleet commander. One day, some girl appeared in Jones’ home. When she left she tore her clothes and cried she had been violated in the admiral’s house. Criminal proceedings were initiated against Jones in connection with the alleged crime. Fortunately, French Ambassador Count Sjur managed to prove that the “violation” was feigned and the witnesses of the “crime” were bribed. Some historians believe that was a plot schemed by the British Intelligence against Paul Jones. The admiral was not appointed commander of the Baltic Fleet and left for Paris to restore his health. Within the next two years, he got allowance from the Russian Empire treasury.

Paris met the admiral with the vortex of the Great Revolution. Jones expected that he would be appointed commander of the French fleet to fight England but in vain. He fell ill with pneumonia and died in absolute loneliness at the age of 45. When a concierge entered his apartment on July 18, 1792 she saw Admiral Jones dressed in the Russian Navy uniform lying in his bed. America’s ambassador to France did not come to Jones’ funeral.

In 1905, historian Augustus C. Buell found a man in America who was keeping memoirs of his great-grandfather serving under command of John Paul Jones. Thanks to the records, the historian with much difficulty found Jones’ grave in Paris. It was buried under thick layers of soil. When the iron casket was unsealed the researcher saw the Scot was lying as alive in his favorite uniform of the Russian Navy admiral. Before the funeral, the casket was filled with wine cognac alcohol as if people who buried the admiral knew that both America and Russia would recollect their hero.

The kilometers-long procession following the dead body of the admiral was headed by French prime minister, and an orchestra was playing solemn marches when it was decided to move the admiral’s body to the US. The US Navy squadron escorted the casket with the body of the admiral on its way to America.

Now, the Russian admiral, the US Navy founder is buried in a special burial-vault on the territory of the Navy Academy in Annapolis (Indianapolis). Naval cadets swear near the grave of the admiral. Guides tell American and foreign tourists storied about the brave man who was friends with George Washington and Thomas Jefferson; designed the Stars and Stripes project (originally there were thirteen stripes and stars on the American flag). Besides, it is believed that John Paul Jones took part in working up the US Constitution. Being in Russia, the admiral offered some Italian composer to compose the hymn of America. Jones stood up for promotion of commerce between Russia and America.

In Russia, a memorial tablet with the name and the bas-relief of the legendary naval commander was placed on the house near the Admiralty in St.Petersburg where Jones lived in 1788-1789. That was done a couple of years ago when Russia’s northern capital celebrated its 300th birthday.