The trial of Nurpashi Kulayev, the sole surviving terrorist of Beslan school attack in September 200, is drawing to an end. The prosecution is asking for life imprisonment. 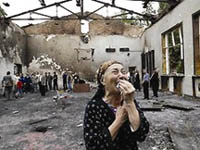 There have not been any big changes in Beslan, nor any changes expected when the trial is over. The town is still in the state of bereavement. Each family is trying to cope with it in its own way.

Fariza, a nimble little girl, is just one year old, yet her earlobes are already pierced. “Well, it’s only natural. She’s a girl, after all,” says Dina, her mother. They look very much alike though Fariza has black eyes and hair, and her mother’s hair is light brown. But they are definitely related to each other.

“I don’t want to put on airs of some heroine. If not for her, I just don’t know what would have happened to me, and vice versa. We were saving each other! Her mother left her at the maternity hospital. Doctors hinted at potential mental disorders of the girl. But I knew she was my daughter the very moment I saw her,” says Dina.

Dina hates recalling those three days in September. Dina took her two children, her son and her daughter, to the Beslan school No1. She got back with her son only. The 10-year-old Aslan loves his sister very much. He supports her mother’s decision. It is a fatherless family, he got killed six months before Aslan was born.

Dina is not going to conceal from Fariza that the latter has been adopted. It is impossible to hide things like that in a small town. Dina does not want to leave Beslan. It is the town where she lost one daughter and found another one. “I’m visiting the cemetery every day, I’m meeting with those women, they’re just like me. But I don’t attend their meetings, I don’t file requests or letters. I stay away from politics though I’m not criticizing those women. They found their own way out of this horror, and I found mine,” says Dina.

“Those women” belong to the Beslan Women’s Committee. A small building hosting the Committee is normally crammed by the women who turn up to chew the fat or engage in a heated debate. The debate seems to be going in that building day and night. The women call into question many issues. Are they doing the right thing? Was it worthwhile going to Moscow to see President Putin? What do they do next? They certainly appreciate that they made quite a few mistakes. But who knows the answers to all the questions? “I’m trying to do everything in the interests of my child who died during the attack. My only daughter died such a terrible death so she is worthy of nationwide publicity including the powers-that-be,” says Rita Sadakova, one of the activists of the Beslan Women’s Committee.

Photographs of smiling children grace the walls in almost every home in Beslan. Zhanna Dzagoeva is sitting under the photos of her two daughters – the 8-year-old Zalina who will never grow old, and Fatima who survived the school siege. Fatima is actually trying to get some sleep but she can not. Georgy, her 2-year-old brother, sings her a lullaby as though she was a little girl. He mother comes in the room. She brings some soup to feed the girl. But Fatima can hardly remember that she needs to swallow food, the left side of her body is paralyzed. She has only vague recollections of the events that crippled her life two years ago. Fatima underwent a few operations, her health seemed to have improved. But the girl started suffering from bacterial meningitis last August, she fell into a coma on the first anniversary of the tragedy. She was taken to hospital again, first to Rostov and later to Moscow. Fatima survived again.

“We’ve been waiting for a call from a Russian bank, they pledged to pay the cost of treatment my daughter will be given in Germany. The girl needs an operation on her cranium and rehabilitation therapy. It takes forever to make necessary arrangements for a similar hospital treatment in Russia. We just don’t have time to waste on endless visits to our bureaucrats. We’re running out of time. We need to save the child before it’s too late,” says Zhanna Dzagoeva.