The short message service dependence is a serious and real disease, which exerts a very negative influence on mental abilities

The epidemic passion for cellular phones in the world has brought in another fondness for SMS messages. Short Message Service has already become an inseparable part of the young culture. Young people use short, hard to comprehend phrases to share secrets, confess feelings, take revenge on enemies, or simply communicate. While cellular operators are counting money in the bank, psychologists say that cellular phones have generated a new epidemic in the whole world – the SMS addiction. 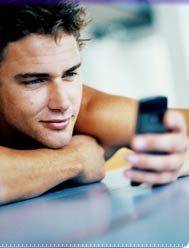 Professional psychologists already offer their services in connection with the widespread SMS-mania. Little is known about this side of the cellular communication mania in Russia, although the SMS-addiction has laid foundation to several scientific works in the West.

British scientists from the prestigious Priory Clinic concluded that sending SMS has turned into a global mania. There are people in the Western society, who have become seriously addicted to texting their friends. Such people can spend hours, pressing buttons on their phones. Specialists say that a big fan of SMS messages does not perceive them as a way of communication – they become a whole environment for such individuals. More importantly, a sick person may not even suspect himself of having psychological disorder.

German experts say that not less than 380 thousand Germans are suffering from the SMS addiction. The short message service dependence is a serious and real disease, which exerts a very negative influence on mental abilities of a human being. To crown it all, a person may suffer numerous financial problems because of the obsession.

”There is no profound scientific research of the SMS phenomenon in Russia yet. For the time being, we have a work on the Internet addiction. A theory says that the virtual communication is gathering steam all over the world because people are gradually losing the art of personal communication,” Sergei Enikopolov from the Russian scientific center for psychological health said. ”Cell operators are trying to “infect” people with the disease, with the help of the short message service. Sending an SMS may seem a good way to get rid of the feeling of loneliness. On the other hand, the texting communication ousts normal human contacts,” he added.

The cellular market is developing very fast, which increases the number of those, who cannot live a day without an SMS message. According to experts' estimates, Russian people sent over three billion short messages in 2003. The number doubled in 2004; a further increase is expected in 2005.

The SMS communication has become a fashion trend in the modern society. Being always available on the phone, a cell phone itself – this is the style of the up-to-date life. A lot of teenagers cannot imagine their lives without cell phones and short messages. A day of a typical teenager starts with reading a weather forecast and a horoscope on a cell phone. “I woke up” is a traditional message that teenagers send to their friends every morning.

SMS services offer a variety of other options nowadays too. Young people can try and look for love with the help of short messages. “I have already dated three guys that I met with the help of SMS. Sometimes we may even sit down in a park together and send messages to each other,” teenage girl Oksana said about her experience. “I have not yet found the boy of my dreams so to speak, but I am not desperate. I just keep on looking,” said she.

”One has to admit that anonymity plays a very big role in the virtual communication. People use their imagination, become someone else that they probably wish but cannot be in real lives. Furthermore, there is no eye contact, which may seem to be a very important advantage to many people. Maybe it is not a disease, but it is a clear symptom of the fact that human communication comes difficult to people,” Sergei Enikopolov said.

Nikolai uses SMS messages to keep secrets away from his wife. He works in an insurance company. The man's SMS affair with his colleague Vera lasts for three years already. The 50-year-old man can talk to his “girlfriend” in his wife's presence, who sincerely believes that her husband goes crazy for cell phones games. “My wife thinks that a cell phone helps her keep me under strict control, but she is so wrong,” Nikolai said.