For young British actress Keira Knightley life has always been a severe test. She has lived for twenty years as if in a nightmare, suffering from dyslexia, clumsiness and a lack of male attention. No one cared to imagine that this ugly duckling, who looks more like a boy and is always dropping something and picking up stains on her clothes, would turn into a charming woman in the future. 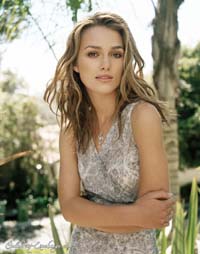 At the same time, however, she has had success in her acting career. At six she got her own agent, at seven she started filming, by fifteen she had played Queen Amidala’s decoy in Star Wars: Episode I, and at 18, after her role in Pirates of the Caribbean, started being referred to as Hollywood’s new rising star. Having played alongside Johnny Depp and Orlando Bloom, she placed highly in lists of the world’s most desirable women.

However, almost nothing has changed in “super sexy” Keira’s personal life. Her relationship with boyfriend Jamie Dornan led to nothing, and other young men, captivated by her on-screen image, did not even want to meet her again after their first date.

However, as we know, there is happiness in her life, as there ought to be. Keira Knightley has finally found her other half. Having hardened her character for the filming of Domino, in which she had to play a head-hunter and worked alongside Hollywood veteran Mickey Rourke, who can tell anyone what real suffering is, Keira started looking with renewed energy for her true love. And she found him.

Wearing a soldier’s uniform and accompanied by beating drums and the sighs of beautiful women, Mr. Wickham moved into the district where the Bennett sisters lived, one of whom was played by Knightley in the recent screen adaptation of Pride and Prejudice. Admittedly, on screen Wickham did not choose her and actually was a genuine scoundrel, yet in real life the actor playing this role, Rupert Friend, turned out the be the very prince whom Keira had been waiting for.

The filming of Pride and Prejudice has become the turning point in the actress’s fortunes. She is now 20, was nominated for an Oscar for best leading actress, is growing accustomed to her sex-symbol status and is enjoying a whirlwind romance which may well lead to a serious relationship. Knightley and Friend cannot spend one waking moment apart. The actress is currently in the Bahamas, filming the follow-up to Pirates of the Caribbean , and Rupert has dropped everything to go and be with her. They spend every free second together, strolling along the beach and kissing in secluded corners. In other words, the “dream factory” has produced yet another story of a Cinderella, who through her beauty and hard work has found love and fame.