Harrison Ford was paid 150 USD for his first film

Harrison Ford is reportedly included in the Guinness Book of Records as the world’s richest film actor. The films starring Harrison Ford exceeded $6 billion in rentals inside and outside the U.S. But he does not seem to be thinking about a quite retirement. 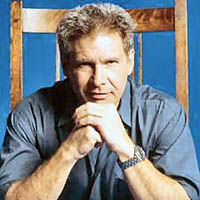 Harrison Ford was paid 150 USD for his first film

The 64-year-old actor is going to star in a long-awaited sequel to Indiana Jones.

Q: When will we see a new Indiana Jones?

A: In 2007. It was very difficult for the three of us – George Lucas, Steven Spielberg, and me – to find time for making the sequel. George finally finished The Star Wars, Steven released War of the Worlds and Munich , and I acted in Access Code. Now we have time to focus on the fourth Indiana Jones.

Q: Both Lucas and Spielberg keep the plot of the film to themselves. They only revealed that events in the film would take place sometime during a postwar era. Could you tell us more?

A: I can only confirm that the movie’s action takes place in a period following World War II.

Q: You were always doing all the stunts yourself. Now that you’re in your sixties…

A: I haven’t had any problems about my age so far. I like it, it’s fun.

Q: Does it mean you’re going to do a fist fight, ride a horse etc. for real again? Or the scenes will be filmed using computer graphics?

A: I believe that the audience would rather see the face of a star than the back of the head of his stunt double in the middle of a fist fight scene. Besides, computer graphics are useless for making a close-up of a hand-to-hand fight.

Q: So you don’t think that you’re too old for acting in that film, do you?

A: Do I look like an old man? I exercise regularly to upkeep myself in good shape. You will probably get rid of your doubts about my age if you see my latest movie Access Code. I don’t have any doubts regarding my age. Besides, I think Indiana Jones who is getting on in years would be fun to watch. He’s normal guy, he grows old just like everybody else.

Q: Do your muscles hurt after you take part in a action movie?

A: I’ve found a secret of longevity. I down a shot of whiskey before I go to sleep.

Q: You play a computer network security expert in your latest movie. Are you a PC user off the screen?

A: You bet. Sure thing, I’m not a computer whiz, but I’ve been using the computer for a long time now. I’m an enthusiastic pilot so I’m mostly looking for some articles and advice on airplanes and piloting when I surf the Internet.

Q: You played in a lot of films where you do heroic things to save your family. Have you ever thought of changing your specialty and act in some alternative movie, say, like Bruce Willis in Sin City?

A: I don’t know. I act in films that are offered to me or my agents. But I would be most happy to act in a movie if its script looked really captivating to me. I would be ready to perform for peanuts then.

Q: Your films totaled more than $6 billion in rentals. You could have rested on your laurels…

A: Well, it’s not for me. I’m always reading a script, getting ready for a part, working on my role for the next movie. I just can’t stay home and do nothing.

Q: What is the most important lesson that you’ve learned during your 30-year acting career?

A: You should never surrender whatever may happen to you.