People take Sasha and Kolya as brothers. On the contrary, they are not related to each other. They were simply born by their HIV-positives mothers in the city of Norilsk about the same time. Their mothers abandoned them. The boys spent a few months in hospital prior to being sent to the Center for the Fight Against AIDS in Novosibirsk. Doctors confirmed the boys’ horrifying diagnoses after conducting a full examination. Then doctors faced a tough question: Where to put the kids next? 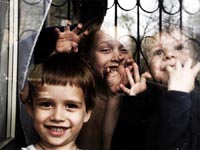 “The number of abandoned HIV-positive children grew along with the number of their HIV-positive mothers,” says Galina Kosmynina, chief doctor of an orphanage for infants in the city of Sosnovoborsk. “A special team was formed in our institution in 2003. Pursuant to the instructions by the regional health department, HIV-positive infants are dispatched to our orphanage. The team has already taken care of 38 children. At the moment, we have 13 children including three with the confirmed diagnoses. All those children were born by mothers who are drug addicts, many have syphilis and hepatitis C,” says Kosmynina.

Sasha and Kolya were already 3 years old when they were brought to the Sosnovoborsk orphanage. They can stay at the orphanage only until they turn 4. Then they have to be settled somewhere else. Alas, no place has been found for them yet. Orphanages refuse to admit them. The staff of one orphanage promised to take every possible measure to keep HIV-positive children from being admitted to the institution.

There is a growing AIDS phobia in today’s Russia. Even adults refuse to realize that AIDS is essentially a sexually transmitted disease, and two other routes of spread are via infected blood or blood products. Many people believe that keeping infected patients at bay is the best way of prevention. The majority of children kept in the Sosnovoborsk orphanage are eventually found sound, and therefore their registration at medical institutions is canceled. The children are kept in the orphanage only because they are born by infected mothers and to be under the supervision of a practicing immunologist for the first 18 months of their life. Fortunately, AIDS is not always a hereditary disease. However, no Russian family has adopted a HIV-posited child. It is against the law in Russia to adopt a HIV-positive infant whose diagnosis has been confirmed.

Meanwhile, dozens of photographs of happy smiling children grace the walls of the orphanage. Those are the pictures of children who got lucky – they were adopted by foreigners. But foreigners do not adopt all adoptable children. First they study medical records and take advice from their doctors. Adoptive parents make a decision only if there is a real chance of helping a child. In foreign countries, all medical bills including the cost of surgery are at the expense of adoptive parents. In view of yet another international scandal (U.S. adoptive parents accused of mistreating a Russian adoptee), Russian authorities have become more of a hindrance than a help to foreign adoptions. Consequently, the number of foreign citizens seeking to adoptRussian children dropped in half. There are a lot of abandoned infants in Krasnoyarsk hospitals and maternity wards. Medical officials just can not find a proper place for the little patients since state-controlled orphanages are running out of a sleeping space.

“I get calls everyday, and all the callers want to know whether we have at least one vacant berth,” says Galina Kosmynina. “The lines to the orphanages keep growing longer day in and day out. We just shouldn’t pull the plug on adoptions for foreigners, we should not deprive children of a chance to have a new family. We recently received the pictures of our Sashenka, his new mom and dad sent them to us from abroad. We were glad to see the boy has changed for the better, he looks so handsome and full of life on those pictures. He was barely alive on arrival to our institution. He is a tenth son of a chronic alcoholic mother.

It was definitely a lucky accident for him – a neighbor found him screaming on the floor, wrapped in rags. He was 10 months old but he weighed just 3 kilos like a newborn baby. Needless to say, we nursed him back to health yet he was very weak at the time of adoption.

We were kind of worried for his new adoptive parents – how would they manage to take care of such a problem child? Now they want to adopt another one in our orphanage,” say Kosmynina.

Foreigners adopted 10 infants in the Sosnovoborsk orphanage. All of them were born by HIV-positive mothers. Fortunately, they were found to be free from the virus. Many foreign families give donations to the orphanage. They bring brightly colored toys, clothing and shoes to Sosnovoborsk. There is a constant lack of state funds, and local sponsors are hard to reach. The swaddling clothes, disposable diapers, and rompers are always in short supply. The orphanage also needs new furniture e.g. beds, tables, and dressers.

Nobody is ever going to adopt Sasha and Kolya. The boys know that eventually they will move to some other place. Sometimes they even start packing their belongings. According to Svetlana Mikhailova, a teacher for the handicapped children, the boys are well-developed in terms of a social environment, they can take care of themselves. But there is a lack of communication because they can only mingle with younger children in the orphanage. The boys had been susceptible to colds in the past. Lately the situation has improved after they began taking specific antiviral drugs. Should their therapy continue on a daily basis and doctors are capable of watching over them regularly, the boys might live a long and normal life.

“The disease is horrendous just because AIDS is currently considered fatal,” says pediatrician Olga Tananokina. “The infected kids look like other kids, but their blood tests show rising levels of the human immunodeficiency virus. They get better after taking a specific treatment. Children like that should be kept under the supervision of doctors at all times,” says Tanankina.

In the meantime, Sasha and Kolya share their dreams with younger children. They dream that someday they will have a big nice house with a cat and a dog in it.