U.S. scientist says scores of UFOs fly around the Sun

Shortly after Hurricane Katrina caused terrible havoc to the Gulf Coast in August 2005, U.S. meteorologist Scott Stevens declared that the natural catastrophe had been generated by Russian scientists. This time around, he accused NASA of concealing data relayed to Earth by SOHO, an orbital solar telescope. 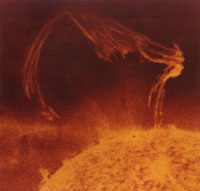 U.S. scientist says scores of UFOs fly around the Sun

SOHO is a joint project by NASA and the European Space Agency. It is currently at a distance of 1.5 million kilometers away from Earth. The orbital telescope takes pictures of the solar flares and prominences as well as comets that fly past the Sun.

Several thousand photographs have been already taken. Some are posted on the NASA website. However, a larger part of them are still unprocessed by specialists due to an immense amount of data coming from SOHO. This is hardly surprising since researchers still have not had time to study thousands of photographs of the Moon, Mars and Venus taken by the U.S. and Soviet probes.

Rumors about UFO’s being photographed by SOHO have been circulating for a long while. NASA would not comment on those rumors or blame irregularities during the transmission of digital images to Earth.

Scott Stevens maintains he has analyzed all photographs available in the SOHO archives. He claims to have found several perfectly identical objects on the photographs taken during a number of years. Therefore, the researcher says, it would be only logical to point out that UFOs would have never been the objects of the same size and form if stardust or residual solar plasma had really caused those “irregularities.”

“I am confident that UFOs are flying in the vicinity of our star,” says Stevens. “I am talking about a fleet of UFOs operating near the Sun. I believe that both NASA and the U.S. government are aware of the existence of a certain civilization whose spacecraft are capable of resisting extremely high temperatures. The powers that be are simply afraid to admit the fact. They haven’t yet decided on the tactics,” says Stevens.

Another Stevens’s theory has to do with extraterrestrial activity involving UFOs near the Sun. According to the theory, UFOs are usually photographed by SOHO prior to large solar flares caused by some experiments conducted by aliens.

“The statements about UFO’s causing solar flares are absolutely groundless,” says Sergei Yazev, chief researcher at the Institute of Solar and Terrestrial Physics under the Russian Academy of Sciences. “We might as well assume that an increase in the flux of high-energy particles before a flare will cause that interference looking like UFOs on those pictures. Due to design characteristics of the SOHO photographic equipment, the telescope will always produce a picture of some winged object in case of a photo session involving some bright spot, be it a comet of a planet. The “wings” will be horizontal in any case. Should SOHO photographs a spacecraft, a picture will have the image of “wings” always pointing at different angles,” adds Yazev.

In the meantime, Earth is in for a global cooling as opposed to a global warming. And the Sun is to blame, according to Habibullo Abdusamatov, researcher at the Pulkovo Astronomical Observatory near St. Petersburg.

The scientist believes that there is a 100-year cycle of solar activity apart from the well-known 11-year cycle.

“The solar radiation flux should decrease sharply by the mid-twenty first century, says Abdusamatov. “Earth will receive less heat than before. A similar global cooling already occurred in Europe, North America, and Greenland in 1645 – 1705. The astronomers maintain there were virtually no solar flares during the above period,” says the scientist.

The historical records indicate that the Vikings left their settlements in Greenland , and the rivers in Europe were ice-clad almost every winter due to extremely low temperatures, which dropped to 40 degrees Celsius.

Abdusamatov reckons that Earth’s global cooling could begin in 2012 – 2013. The solar luminosity should reach its minimum in 2035 – 2045. The global cooling will follow after a delay of 15 – 20 years. The global cooling will probably last about 70 years just like the last one in the Middle Ages. However, a decrease in the intensity of solar radiation is a usual natural phenomenon. It has nothing to do with the activity of “little green men.”