Ukrainian beauty without legs has returned to the stage

She is the Ukranian aerobics champion, a student at drama school and fell under a train. But she has not become an invalid and still continues to shine on the stage. Elena walks along the road – confident and voluptuous. Men lust after her. She is bright and successful. She has everything; beauty, talent, a good job, loving relatives and friends. She just does not have any legs. 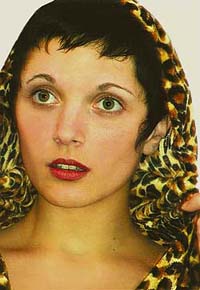 Ukrainian beauty without legs has returned to the stage

She recalls that it was a happy summer, one full of hopes and dreams. Her career in the theatre had just taken off, she had presented a choreography exhibition “Helios” to judges at a national competition and had met her Prince Charming. They went to Crimea together and returned home happy having become man and wife. In Simferopol the train stood at the station for half an hour and then without any warning set off. Elena was holding on to the handrails, jumped onto the step and at this moment she was fiercely hit from behind.

The scene is etched in her memory: the screeching of the braking train, the burning smell and she sitting on the platform and her legs lying on the rails separately with new trainers on.

Doctors at Simferopol Hospital struggled for four hours to save her life. Her recovery was very tough amidst the white walls of the ward, the blinding light from the lights, and the burning pain in her legs. “I lay there feeling completely empty, not crying or getting angry or scared but simply feeling helpless. I was simply unlucky.” Her partner appeared in the evening. “His eyes were inquisitive, his face gaunt and his nose pointed. I do not know why but at the time he reminded me of a ground squirrel who wants to hide in his burrow. That’s when I got scared that I might end up completely alone.” “My God, how can it be. . .” he said covering his face with his hands.

“If you came here to cry, then you had better go. “

And so he left, having said that he would help her with money but he did not come to the hospital again. He phoned once from Kiev to say that he didn’t have any money to give her.

Friend rallied around to help the brilliant, successful and easy going Elena Chonka. However, having ended up in hospital, she feared meeting her friends. At the start they did not visit her.

“It didn’t occur to us that Elena was confined to her bed,” one of her friends recalls. “When I came to the ward and saw her eyes, open, daring and ironic, I felt relieved and rushed up and hugged her.”

One evening Elena decided to phone Andrei. She suddenly had the urge to muse over the wonderful summer, to see the photographs from Hersones where life had seemed full of unlimited happiness. He had all the films “Is it you?” asked a shocked Andrei. “How are you? Perhaps you will be able to walk with crutches?...” “Me? With crutches?” exclaimed a bemused Elena. “Never! I will walk again like before, you’ll see!”

“Within a year we will try to get you walking with prosthetic limbs,” predicted the doctors. Within a month, however, Elena could stand up even though her wounds had not yet healed. She had not got used to not having any legs and keeping her balance was a problem. She has to learn not only how to walk again but how to get back on the stage. She did not give in to the feelings of pain, suffering and weakness.

The repercussions of her misfortune have been far-reaching. Her partner has left her, she has had to leave the theatre and “Helios” with not having a choreographer is on the verge of breaking up.

Autumn and winter have gone and Elena has managed to leave the house. She went out alone without crutches. She managed to walk in a trouser suit around the courtyard. She had to hurry though because she had so many things to do.

She entered the Journalism Faculty at university and received a first-rate degree, has restored her reputation in the theatre and has learnt how to drive. She now has a fixed routine to her life: morning – television (editor of a popular programme), evening – choreography and aerobics. She has long been popular, as a model of famous designer Yuri Solomko and as leader of a children’s dance group. She has won the prize “Pride of the Ukraine´ which is awarded for bravery and excellence.

When people ask her how she has managed to do all this, Elena jokes, “I know one magical phrase ‘I will be able to do it’.” She has conquered all her complexes although the path has not been easy. “I went to the beach and to relax in the sea. . .I agreed to pose for the Yuri Solomko’s shocking exhibition ‘Regeneration’”. These pictures have created a furor. One loved it whilst others criticized me for it saying that I had overstepped the mark. I simply wanted to say that beauty is not just arms and legs; it is the fire that burns within.

“How did you cope with depression?” I asked

“Depression?” says Elena surprised “There is not such a word in my vocabulary.”

One evening the phone in her flat rang.

“I saw you in the photo, you’re inspirational!” exclaimed the unfamiliar voice. “I am called Igor, I am a Moscow businessman and would like to give you a bouquet of red roses.”

“And how do you intend to do this?” said a surprised Elena.

“I am on the road now and will be in Kiev tomorrow!” he replied.

The unknown man was not lying and he turned out to be quite an interesting chap.

“But . . . it was not my other half,” smiles Elena. “I would, however, like to thank the man for his very kind gesture.”

We walk around Kiev at night: the lights, snow-covered trees.

“Why did you celebrate the New Year outside?”

“I wanted to see the stars. I phoned friends and asked who wanted to join me. They all gladly accepted the offer. A real Christmas tree, the sky, the snow – it’s cool!”

“I have already become well known,” she laughs, “and I have found a really good vocation in life – to help those who are in despair. They write to me and come to see me.