Russian athlete Svetlana Zhurova won a gold medal during a speed skating competition at the Winter Olympics in Turin on Tuesday. Zhurova became an Olympic champion as she beat a pair of Chinese skaters on a 500-meter track with the result of 76.57 seconds. 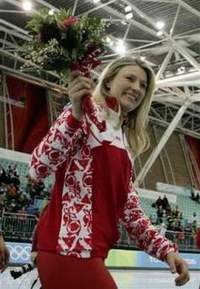 Zhurova’s main competitor was a Chinese skater Wang Manli. The Russian speed skater won the competition after the first attempt and left Manli 0.08 seconds behind. Tomomi Okazaki of Japan took the third place in the race. The results of the competition were as follows:

This was the first-ever Olympic gold medal for the 34-year-old Russian, the sixth placer in the 500m at the Salt Lake City Winter Games four years ago.

Another Russian athlete, Yulia Nemaya, fell down during her second attempt and thus took only the 29th position on the list.

The medal won by Svetlana Zhurova became the fourth gold medal that the Russian Olympic squad has won so far in Turin. Three other gold medals have been awarded to skier Eugeni Dementiev, Svetlana Ishmuratova (biathlon) and skaters Tatiana Totmianina and Maxim Marinin.

In addition, Zhurova has won the first Olympic gold for Russia in the field of speed skating during the recent 12 years.

Svetlana Zhurova acknowledged after her triumphant victory that she was sleeping between the two rounds of the race. “I took a nap because I knew that everything will work out for me just fine if I sleep well,” the Olympic champion told reporters. “When they showed the results I could not believe that I won. I thought at first that I was the second one to finish the race,” said she.

Russia's fourth gold medal winner also said that she would like to devote her victory to her little son. “I have sacrificed really a lot for the sake of this victory. I had to leave my son with my mother and sister and concentrate on the training. When I returned home once I saw that he had already started walking. It was a shock for me but I tried to pursue my goal – an Olympic medal. It would be the best gift for my son I thought. No one believed that I could be a candidate for the title of an Olympic champion a year ago when I was recovering from childbirth,” Svetlana Zhurova said.

In the meantime, the administration of the Russian Olympic team has been experiencing serious problems with the sponsor, the Italian company Bosco di Ciliegi. The International Olympic Committee has recently set out its claims regarding the appearance of the Olympic clothing of the Russian team. Spokespeople for the committee said that the sponsor had placed several of its logos on the clothes.