Paris Hilton to shock the world as Mother Teresa

The famous Indian director T. Rajeevnath, who is scouting for candidates for the lead role in a film about Mother Teresa, has sent the script to the renowned hotel heiress Paris Hilton. The director of agency IANS confirm that its agents have been in touch with Paris Hilton. 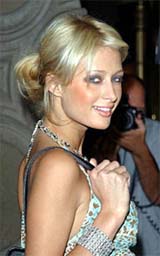 Paris Hilton to shock the world as Mother Teresa

Rajeevnath said that he was impressed by the fact that Paris Hilton has refused to pose nude in Playboy magazine. Once he had heard about this, he decided to try her for the part of Mother Teresa. The film will be shot in India, particularly in Western Bengal and several foreign countries.

Rajeevnath, 54, has won a prestigious national award for best director and also many international awards. His films include, “Moksham”, “Janani” and “Thannal”.

“Mother Teresa” will be Rajeevnath’s eleventh film. A few international production houses have already expressed their interest in producing the film. The budget is expected to be about $11.3m.

There are several other actresses beside Paris Hilton who want to audition for the role of Mother Teresa, but the final decision will be made later. The director plans to give the proceeds from the film to charity. Shooting of the film will begin at the start of 2007. The director hopes to receive the blessing of the Pope for the film.

It must be noted that the scandalous reputation of Paris Hilton does not exactly match the pious image of Mother Teresa. She has been in many well-known sex scandals. At the end of last year Paris’s lover Tom Sizemore published photographs which showed him having sex with her.

The first sex scandal occurred when Hilton was only 18 years old and her partner Ricky Solomon was 37 years old. Pictures were posted on the internet of the hotel heiress naked. Soon after this a sex tape with Paris Hilton in appeared on the internet.

After the huge scandal, Hilton promised that nobody would ever see her naked body again. She has even refused to pose in a swimsuit in films and has rejected several contracts with famous fashion houses who have asked her to market underwear.

Last year people even tried to deceive the hotel heiress into taking off her clothes. The owner of Playboy magazine Hugh Hefner offered Paris Hilton and Nicole Ritchie a million dollars to pose nude. In actual fact Hefner promised this money to Nicole if she persuaded her co-star in the film “Simple Life” to pose naked for Playboy. He did not get away with the scam. The sexy star’s refusal evidently impressed director Rajeevnath.

Paris forgot to pay the rent for her lock-up, where she kept her diaries and a load of her other personal items. The owners of the lock-up, not bothering to find out who the place belonged to, entered and as such people often do in such situations, gave the items to the first person that wanted to buy them.

The purchaser ended up with a lot of rather sensitive material. Amongst the items is a video in which Hollywood heart-throb Colin Farrel is having sex.

David Hans Schmidt has offered to sell the collection of Paris’s things for the “symbolic” sum of $20m.