Humans to decipher the DNA of God and clone another Christ 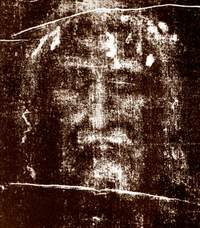 Humans to decipher the DNA of God and clone another Christ

It seems that one of the prophecies made by St. John the Baptist is coming true. “When the thousand years are completed, Satan will be released from his prison, and will come out to deceive the nations which are in the four corners of the earth.” And this has nothing to do with mysticism. Researchers say they would like to clone Christ. But with this good intention they on the contrary may get an antichrist. Famous chemist Alan Adler who studied samples of the shroud of Turin, the legendary burial cloth into which Jesus Christ was wrapped after crucifixion, made a sensational statement not long ago.

The researcher said there was blood on the shroud and it was shed by a man who died a violent death.

The University of Texas Center for Advanced DNA Technologies, USA, analyzed the DNA of the bloodstains. Head of the Center Victor Tryon confirmed that was human genetic material. It was divided into several samples and sent to different laboratories for further analysis.

No results of the research have been published yet but there are certainly some. Dr. Leoncio A. Garza-Valdes, one of the few researchers allowed to touch the shroud of Turin is working on his book that will have a shocking name, The DNA of God.

The very abbreviation DNA seemed to be rather common for majority of people a couple of years ago. But today it is a serious cause for anxiety. Indeed, DNA gives researchers an opportunity to produce clones, a copy of any creature whose DNA is available for experiments. Experiments of this type have been already made public: Dolly the sheep became an absolute cloned copy of a sheep whose genetic material, DNA, was available.

Soon, it became clear that cloning humans was also possible. Professor Richard Seed declared he would solve the human cloning problem by the end of the millennium. He said he was seeking a fitting candidate for cloning. Finally, researchers supposed that blood found on the shroud of Turin might be used as genetic material for cloning.

Last year, in an interview to The Time Dr. Leoncio A. Garza-Valdes summed up the decade-long dispute about the authenticity of the shroud of Turin. The researcher said he had no doubts that the shroud of Turin had been Christ’ burial cloth and that it was his blood that stained the cloth.

In 1988, three laboratories from England, Switzerland and the US conducted a radiocarbon analysis and made a conclusion that the fabric of which the shroud was made was produced in the 14th century. In other words, the laboratories stated the shroud was a fake. And it was just recently that the erroneous conclusions were disproved. Russian researchers removed the cause of the doubts.

Russia’s Doctor of chemistry Dmitry Kuznetsov conducted several experiments to persuade his colleagues that they were mistaken when determined the cloth dated back to the 14th century. He said the results of the radiocarbon analysis were distorted with excessive carbon that the fabric absorbed during a fire that the shroud had stood. He stated that in fact the shroud was older than traditionally believed and was at least 2,000 years old.

No so long ago, the Pope who is known for his absolute honesty also answered ‘Yes’ to the question if the shroud was genuine or not.

Some of the prophecies of the past sound particularly mysterious today. It was predicted that there would be another coming of Christ. At the same time it is known there was a prediction telling that an antichrist in the appearance of Christ and in his flesh would come too. In other words, this antichrist may be a fake double of Christ. And this may actually happen thanks to cloning. The prophecy says the antichrist will first of all kill two witnesses of his appearance. Researchers who decided to clone Christ are highly likely to fall the first victims of the antichrist. And then, the usurper and impostor under the guise of Christ, “the man of sin” will personify the absolute negation of God’s commandments and set nations on to deadly fights.

Today, researchers suppose that the Number of the Beast may be somehow connected with the genetic code indicated in figures. The number 666 may be the sequence of DNA genetic signals or DNA fragments necessary for successful cloning.

It is a proven fact that the image of a human body on the shroud is not a fake. No significant trace of ink, dye or paint has been discovered on the cloth. What is more, it is not clear how the image in the form of a photographic negative appeared at all.

Physics Doctor John Jackson from the US Air Force Academy and the head of the Shroud of Turin Research Project says the fibers of the image were charred to the depth of 15 micron only and just from one side. He adds that hard X-radiation may produce a similar effect. And it is a great mystery what could probably be the source of such strong radiation two thousand of years ago.

There are many things about the shroud that would prove that it was the burial cloth of Christ, such as a Roman coin over the both eyes minted between 29 to 33 AD. The Wounds are consistent with the Gospel account of Christ's ordeal. A) Crown of thorns. B) Bruising of face. C) Shoulder abrasions D) Knee abrasions E) scourage marks F) nail wounds in hands and feet G) wound in side. H ) Legs NOT broken !

People who doubt that the shroud is authentic suppose that probably some hoaxer used the Gospel account of Christ’ sufferings to draw the image on the shroud. And made some mistakes at that. A hole on one of the palms of the image on the shroud allegedly made with a nail evoked much suspicion. It was thought that crucified people had their wrists nailed otherwise palms were not believed to bear the body weight. An experiment conducted on dead bodies revealed that when palms of dead people were nailed exactly at the spot marked on the shroud of Turin the palms could bear the body weight. This is a spot having particular bones protecting the flesh from tearing and the palms from deformation.

Researcher Alan Adler says not log ago researchers discovered traces of exuding liquid blood material right on the shroud. Doctors learnt about the existence of such liquid only in the 20th century. It proves that even a highly-proficient hoaxer had no notion of such liquid and thus could not paint it on the shroud. So, the cloth actually contacted with a human body.

It is important that the liquid analysis confirmed the human who had been wrapped in the cloth died of dehydration and pain shock. Earlier, experts denied the hypothesis that crucified people inevitably died of asphyxia. An experiment conducted involving volunteers proved that the pose of a crucified man caused no problems to breathing and allowed victims stay alive for several days.

The shroud of Turin is a linen sheet into which Christ was wrapped after being taken from the Cross. The ancient linen cloth 14 ft 3 in. long and 3 ft 7 in. wide is kept with special care in a special metal casket in the Cathedral of St. John the Baptist, Turin, Italy. Earlier it was believed that the first record of the shroud dated back to 1354. But a recent research conducted by Ian Wilson confirmed that there were earlier records dating back to 1200. These records mentioned a cloth that by many features resembled the shroud of Turin. At that time, the relic was known as the Holy Cloth of Edessa as it was kept in the Turkish city of Edessa.

Secundo Pia of Turin, a lawyer and amateur photographer photographed the Shroud using glass plates for the first time. When he washed the negative plates he was overwhelmed to find a positive image, and realized he was watching the body of the Crucified Jesus!

The shroud of Turin was damaged in a fire in 1532 and stood another fire in April 1998.

Recent studies of the image on the shroud allowed researchers determine the height if Christ; he was about 180cm.

A little-known relic kept in a monastery in Oviedo, Spain, is a swath of an ancient fabric with bloodstains. Recent expertise has revealed that the blood on the cloth is identical to the blood on the shroud of Turin. The cloth of 83x53 cm in size is called Sudarium which means “face cloth” in Latin. Researchers believe it is the cloth with which Christ’ face was covered after he was crucified and was kept folded up in a coffin together with the dead body. Chronicles say that the cloth was removed out of Jerusalem during the war against Persia in 614 A.D. It came to Oviedo in 1113.