The Russian tennis player will become the world's highest paid athlete, making up to $100 million every year

Russian girl Maria Sharapova has conquered the world of tennis. Nature has showered her with beauty, long legs, an incredible capacity for work and a huge sports potential.

Anna Kournikova has been considered the central sex symbol of sports for recent several years. Anna has made it possible to raise the popularity of women's sports. Foreigners may not know Russian president's first name, but everybody knows Kournikova's name. Anna became that famous owing to the efforts of the promotion company Octagon. The fame of the Anna Kournikova brand was a thorn in the side of the management company IMG. 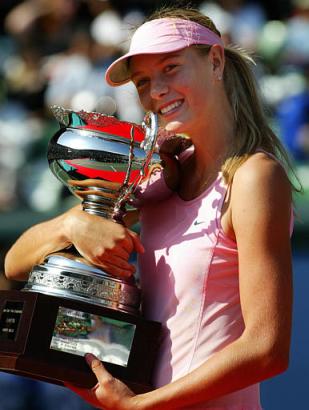 The company's head Mark McCormack was desperately looking for a young girl, of whom he would make a global megastar. He was strongly against all Russian candidates, the girl was supposed to be only an American. Time was passing by, but the States could not give McCormack a good appropriate girl. The new tennis star, Russian girl Maria Sharapova, could meet all the requirements: she has talent, beauty and she knows what it is to work hard.

It took Mark McCormack really long to approve the Russian girl for the vacancy. IMG took hold of Maria and the project “Maria Sharapova, the Superstar” was launched. In about a year, the Russian tennis player will become the world's highest paid athlete, making up to $100 million every year.

When Maria Sharapova made her first appearance in a professional tournament, the President of the Russian tennis association Shamil Tarpischev said: “This would be a lot better than Kournikova.” He said it right. The young Russian girl started realizing her working capacity from the very first moment, when she came to the world of professional sport. She became the world's champion and the Wimbledon winner at the age of 17. IMG agents are taking great care of Maria: the Siberian girl will help them earn millions of dollars.

If someone still thinks that Maria Sharapova is a 17-year-old fighter, who goes out on a tennis courts and beats all tennis celebrities like Anastasia Myskina, Serena Williams or Lindsay Davenport, this person is definitely wrong to think so. Research institutes and health clinics take care of Maria 24 hours a day.

It was Robert Lansdorp, the “father” of Pate Sampras and Lindsay Davenport, who gave a start to Sharapova's career in 1998. He offered the following scheme to Maria's agents. The girl was supposed to come to California for two weeks, then she would go to study at Bradenton Academy for two or three weeks, and return to California again. Maria started that practice until she turned 14. 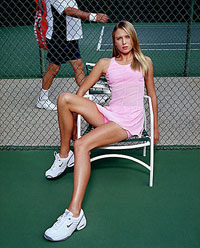 Playing football was her favorite exercise. Robert Lansdorp said he saw that Maria Sharapova had a so-called sense of the court. “It was not her style to make mistakes,” said he. Yoga specialist Sybel Boss started teaching Maria the art of yoga three years ago. According to the instructor, Maria decided to make yoga a part of her life. “The practice of yoga helped her become more flexible and liberated,” Boss said. “When Maria won Wimbledon, she fell down on the ground and raised her arms towards the sky – it is called the hero position,” he added.

When Maria Sharapova became a star, paparazzi started chasing after her. A $300,000 reward was promised to the first paparazzi, who would take a nude shot of the girl. If a photographer captures Maria with her boyfriend, the reward will be a lot higher.

Maria Sharapova is conquering the world. Her twin cousin Dasha Sharapova is growing in the Russian resort city of Sochi. Dasha works with Maria's first coach Yury Yudkin. It is not ruled out that the girl will become a part of the “Sharapova” project too.