An Italian couple decided to adopt the orphan and take him to Italy, but the boy decided to return home

Ilya has been living in Russia's Far East for almost a year now, although he was a Belarus and even an Italian national. The story of the ten-year-old boy had a misfortunate beginning. Ilya's grandmother, Lidia Khaitskaya raised her two children, a boy and a girl. When the children grew up, the son found his place under the son, although the daughter, Svetlana, was not lucky to find a way to steady down. Lidia had to raise her granddaughter too. 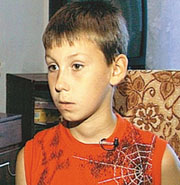 Svetlana, her husband and their son Ilya went to the town of Khor, the Far East, in 1995 to visit Lidia. The little boy was only 1.5 years at that time. “I noticed something strange in the way Svetlana and her husband behaved. Svetlana asked me, if she could leave Ilya with me for 20 days, because they needed to go somewhere. I couldn't take on such responsibility, because I was working, so I asked them to take the little boy along, and so they left altogether,” Lidia said.

That was the last time, when Lidia saw her daughter alive. Afterwards, the woman spent almost ten years, looking for her daughter, writing numerous letters and making countless phone calls. Svetlana's husband called Lidia in February of 2003 and said that her daughter had passed away. “He told me to take Ilya from him. He said the boy should live with me. I wondered why and he answered that Ilya was not his child.”

Lidia had nothing to do, but to travel to Belarus across the whole country to bury her daughter. It turned out that Ilya was not living with his family, because Svetlana had been deprived of parental rights. Lidia could not see her grandson, when she arrived in Belarus: the boy was on holiday with other children from the children's home, where he was living. Lidia started working on custody, but the director of the children's home said they would not give the child away to an elderly lady. Furthermore, Lidia was shocked to know that an Italian family intended to adopt her grandson. The woman started sending numerous letters and telegrams to the home, begging the administration to give the little boy to her.  As a result, the Family Center of Belarus did not issue the custody documentation to the Italian couple. However, it was allowed to take the boy to Italy for a short period of time.

Ilya has remarkable memories left from his Italian holidays. The boy was surrounded with love and care, everything seemed to be a breathtaking adventure for him: he swam in the sea, went on excursions to see castles and cities. The boy's would-be parents, however, could see that Ilya would not be able to stay in Italy for long. They realized it because Ilya was constantly talking about his home in Russia, about his sister and grandmother. The two Italians could not speak Russian very well, although they could see everything clearly in the boy's eyes.

In the meantime, Lidia was waiting for her grandson to return to Belarus. The court eventually decided to grant custody to the boy's grandmother.

Ilya is now living in Lidia's house in Khor, where he has his own room, plays his own toys and games. The woman is doing her best trying to take care of the little grandson. To make a bit more for a living, Lidia bakes cakes and sells them to office employees in the town. Ilya helps his grandmother in the vegetable garden: the boy waters and weed plants.

Sometimes the elderly lady thinks that she should have probably let Ilya stay in Italy. The boy could have had good education and better living conditions there. In addition, the Italian couple was very loving careful and towards the boy. Yet, the lady brushes such thoughts aside immediately: “He is my little boy, my blood, my daughter's son. If something happened to him in a foreign country, I would never find that out,” exclaims she. “I would never be able to give the boy away. I would go crazy and curse myself, if I did,” the old woman says hugging the boy. Ilya sneaks out from granny's arms and runs to his room. “He is a shy little boy. Maybe it is one of his habits that he obtained in the children's home. I carefully try to find out what he has there on his heart and in his mind.”

Lidia is certain that her grandson will become a successful man in life when he grows. He is a good student at school; he feels other people's care and love. His past experience made him a reasonable and practical individual. Ilya decided for himself that the European well-being is not better than his own family.