On the brink of another tragedy 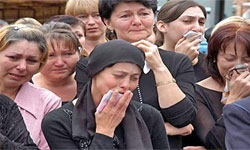 The town of Beslan is no longer in mourning.

Nowadays, poor people of this town in North Ossetia are enraged. Mourning will be officially over on October 13th, 2004. Relatives of those who have fallen victim to the ruthless terrorist act of Sept.1 are ready to take vengeance. Ingush population is in a state of shock.

One does not need to walk too far – a small village of Kartsa is located within a few kilometers away from the town. This is a tiny Ingush settlement on the territory of North Ossetia. Local population is petrified; it awaits “vengeance.”

Residents of the Karts village are ethnic Ingush people. Hatred between both of these nationalities is deeply rooted. Back in 1992 for instance, there’s been a bloody battle between Ossetia and Ingushetia, which took away lives of hundreds of people on each side. Thousands of Ingush people had to flee from the territory of North Ossetia; many years had to pass before they could return to their homeland. The village of Karts is one of such places.

After the Beslan tragedy, authorities are in no rush to define nationalities of those involved in the terrorist act. People are being extremely cautious and handle information with care. Beslan residents are certain in the terrorists’ identities. “Ingush people are to blame!”- yell some of the locals in Beslan from the top of their lungs. “Ingush bastards murdered our children!”

Residents of Karts could sense the danger even before the storm of September 3.
“Ossetians were ready to attack us even before the storm of the school,” comments a teacher of French Zarema Tochieva. “They do not accept the Ingush nationality at all. To them, they are all bandits. They have decided so a long tie ago; and I doubt they will ever change their views.”

According to Tochieva, some Ingush families from the village of Karts and other villages have already started moving to Ingushetia. Military posts are strengthening border security posts to ensure safe migration. Some schools even advise their students to stay at home once the holidays are over.

Even the Russian president Vladimir Putin does not rule out the possibility of new bloody conflict. According to him, the North Caucasian region of Russia has fertile grounds for cultivating extremist propaganda and terrorism. At the same time however, Caucasus remains one of the most important political bases for Putin, which Russia does not intend to let go. Russian president is certain that what terrorists want to accomplish is “to shake North Caucasus” and to immerse the land into a dark abyss of civil war between various nationalities.

Beslan is full of people in black. Today, the city is in mourning. But one day people will stop grieving and will call for vengeance. “None of us wants to forgive and forget,” says local driver named Khodov. “This is Caucasus. Forgiveness is impossible in this situation. Right now we cannot touch weapons; we are mourning our children. But once 40 days elapse, this ban will be lifted.”

Even those youngsters who have survived the hostage crises dream of vengeance. You can see hatred in their eyes, writes “Komsomolskaya Pravda.” Psychologists have no clue as to how to approach the subject with teenagers. Older kids prefer to keep everything inside. It is obvious however how those memories devour them from the inside. In some cases, their parents forbid their children to bring up the subject altogether.