Legendary rock stars, however, are determined to come 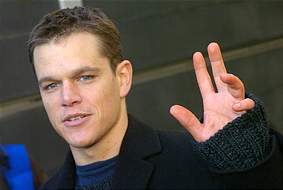 ”Recent tragic events in Russia have exerted enormous psychological pressure on the whole world. A lot of foreign guests delayed or canceled scheduled visits to our country. However, Glenn Hughes and Joe Lynn Turner do not intend to change their plans,” Men said.

The two musicians and their producer, Mark Wexler sent a letter to Russian colleagues presenting their condolences in connection with recent terrorist acts.

According to Tatarintsev, the Russian division of the movie company considered it pointless to hold festivities. The decision was coordinated with the company’s administration in London.

Matt Damon's visit to Moscow was scheduled to take place within the scope of the promotional campaign for the actor's latest film “The Bourne Supremacy.” The film producer, top managers of Paramount and United International Pictures were supposed to visit Moscow together with the actor.

Furthermore, it has been recently reported that Hollywood actor Tom Cruise canceled his visit to Moscow for the same reason. Cruise was expected to attend the Russian premier of his film “Collateral.” Spokespeople for United International Pictures believe the star changed his mind because of the recent air crashes in Russia.