The couple is expecting a child

Milan's forwarder Andrei Shevchenko is no longer one of Ukraine's most desirable single men. On July 14th the football player married American model Kristen Pazik. The ceremony took place in Washington – it was hidden from photographers and reporters. 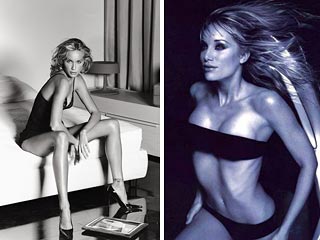 ”I did not want to tell anyone about my wedding, so I kept it a secret. On July 14th I got married in Washington,” the football player said. The newlyweds are expecting a child in November.

Andrei met his future wife at Giorgio Armani party. Kristen was a big fan of Milan. When she saw 'the real Shevchenko' with her own eyes, she was struck with admiration. She came up to the football player and congratulated him on his successful career in the club. Andrei did not prove to be a shy guy, and the two people developed a relationship.

After the meeting at Armani's, there were a lot of phone calls, dates, congratulations and sms-messages. “We have spent millions of hours talking over cell phones! It was a start of our love affair, the real passion,” Pazik told GQ magazine.

Andrei Shevchenko started playing for Milan in 1999. The club paid him $25 million. During the first year in the club, Andrei scored 24 goals in 32 matches. He scored 19 goals in 41 matches playing for the Ukrainian football team.