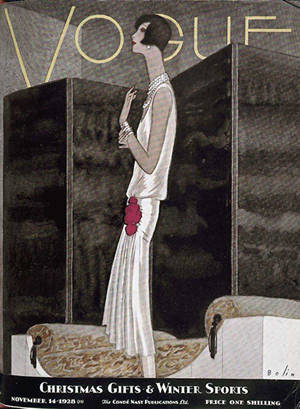 “You should have walked naked along Red square to top it all!“ – Deputy Minister of Light Industry of the USSR shouted at a slim white-haired girl and his well-groomed face grew crimson with anger. Director of VIALEGPOM (All-Union Institute of Assortment of Light Industry an Clothing Culture) who was standing next to Galya was doing her best to screen her woman-worker: she meant that the latter was too young and still slow-witted.

The incident happened in the autumn of 1969 when in the Russian version of journal “America” there appeared a photo-report reprinted from the journal “Vogue”. Early in May that year “Vogue” sent a famous photographer Arnot de Rene to the USSR with a task to take photos of a prкt-a-porte collection of transoceanic modelers of the coming season with sights of Moscow at the background. At a special permission signed by A.N. Kosygin, President of Soviet of Ministers, a number of photos were taken in the Armory Chamber. Galya Milovskaya, the most famous model at the moment, posed with the rod of Katherine the Great. She was also holding the famous diamond “Shah” – Persia’s compensation for the death of the Russian ambassador Griboyedov – under the supervision of a dozen of guards. But those photos caused anger in Staraya (Old) square because the model was “forwardly” sitting just on the cube, wearing a trouser suit, besides, with her back to the Kremlin wall.

- We did not attach any importance to the fact that over there, near Vasilyevsky slope, there were portraits of proletarian leaders, because the shooting took place a day after the demonstration devoted to Victory Day, - Galya Milovskaya recollects. – So from the point of view of the censors it was nearly an anti-Soviet action. It was clear that there was no intention, but, as it often happens, they needed to find a scapegoat and I got a strict warning…

Nobody thought that the student of Theatrical school named after Shukin Galya Milovskaya would become the most famous Soviet top-model of that time. It so happened that in VIALEGPOM they urgently started to look for a substitute of a famous model Tamara Vladimirtseva who had gone on a maternity leave. At the moment the first and the only International fashion festival during the Soviet period was approaching. On seeing Galya designer Ira Krutikova at once realized her potential.

Galya Milovskaya’s success at the Festival where modelers and journalists from all countries were present was stunning. Slim and slender, besides very photogenic, the Soviet girl turned out to be such a wonder that Galya received a tremendous amount of offers.

While the authorities of that time looked upon Galya Milovskaya with great jealousy, in the circles of liberal VIPs she was extremely popular. Non-conformist artist Anatoly Brusilovsky wrote in his book “Studio”: “Once at the end of ‘60s a famous Italian photographer Kayo Mario Garrubba who was already known in Moscow came. He was looking for such a material for the most popular Italian journal “Espresso” that the issue would be bought up at once. I invited to my studio a famous and beautiful model Galya Milovskaya about whom Western journals, “Vogue” for example, wrote that she was a lady of “A” class, the highest class in their opinion. Galya was really wonderful! I also invited several married couples of my friends, set a fine table, made a still life picture: from the socket of my old gramophone piles of fruit (bought in the Central market) fell down on the table like from a horn of plenty; there were flowers, wine and old-fashioned goblets. I had done all these just for inspiration. I started work. I drew a picture on Galya – flowers, leaves, butterflies. Stalks and fronds were just creeping along Galya’s beautiful body. Her eyes and lips were turning into metaphors. Garrubba was shooting like a madman”.

- It was a kind of a game, - Galya says to me. – It personified the appearance of Russian “body-art” which had already spread in the West. For a greater sensation “Espresso” published next to my photo Tvardovky’s poem “Terkin in the Other Side” which was forbidden in the USSR. But it had another title – “On Stalin’s Ashes”. You can easily understand what the reaction of party officials was like. They blocked all my contacts with foreign customers and I was cut away from the podium.

Little by little the first Soviet persecuted top model decided to leave the USSR, she knew that she would not stay unemployed abroad. Brusilovsky helped her: he formalized an invitation to Israel. She was going to depart on April, 14, 1974.

She came to Italy just at the moment when Ailin Ford had organized a competition of the most famous models in the world in the island of Capri. Galya was one of them, but she had had a psychological stress at the moment of departure, there were hordes of paparazzo attacking the participants. All these upset her routine and the Moscow “star” returned to Rome. Soon she was invited to work at the English “Vogue”. During her business trip to Paris Galya made an acquaintance of banker Jan-Pole Dessertin and they got married.

That was the end of one period in the first Soviet top model’s life and another one started which can be called a return to the beginnings although Galya Milovskaya’s business became cinema, not theatre. Several years she studied in Sorbonne, at the department of cinematography and audio-visual arts, with Erich Romer and Jan Rusha as her teachers. She studied in the American Cinema Institute, Los Angeles, too. She shot several films. Among them was a documentary called “Those Crazy Russians”, it was about nine Russian artists – Tselkov, Zaborov, Putilin and Shelkovsky - who immigrated to France.

This film got several rewards at international festivals and many critics recognize it as one of the best films ever created about fine arts.

Even now Galya always has a digital camera-recorder with her. One can meet her nearly at every Paris opening day where works by Russian artists and sculptors are exhibited.