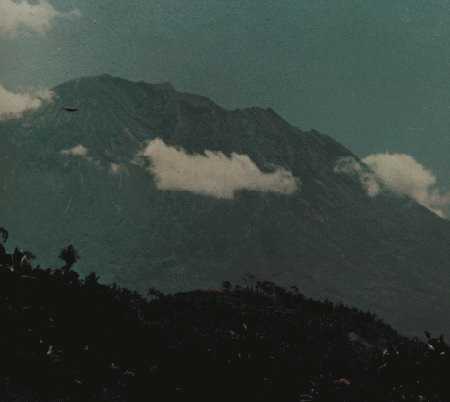 An unidentified flying object has crashed in the Far East. Hundreds of people witnessed the event. The UFO crashed into the rocky mountains located in the town of Dalnegorsk.

A strange spherical object has slightly brushed upon the mount at approximately 8:00pm, January 29th, 1986. Witnesses claim they saw a bright flash but did not hear anything. The glow from the fire appeared rather strange: blue aureole lasted for about an hour and a half.

At first, local residents thought it was a rocket from the nearest military base. However, as it turned out, neither our, nor foreign armed forces conducted training at that time.

In a few days after the incident, a group of rescue workers and researchers headed by professor Dvuzhilin climbed up the Rockies. They managed to collect vitrified metal fragments for analysis.

Scientists were mesmerized by the results:

The fragments contained majority of elements of the periodic table. The alloy was incredibly strong; nothing but a diamond cutter could cut it. Strange things were happening to the metal fragments as well: certain metals were miraculously substituted by others. After melting the alloy in a vacuum, spectrum analysis did not detect previously present particles of gold, silver and nickel. Instead, such elements as titan and molybdenum appeared.

Back then scientists could not come up with a logical explanation and simply called it “mysticism”. The main surprise however was yet to be discovered. Some of the fragments contained unusual gauze. It was made of the tiniest (only 17 micron wide) carbonic and metal threads. They in turn were made of twisted fibers.

It was impossible at the time to create anything that would resemble that piece of work. Nobody knew its main purpose either. Russian scientists did not want to mention aliens and simply assumed that the crashed object was an American apparatus; and the gauze was a mere example of their revolutionary technological advances.

After the USSR's collapse, all of those fragments (collected at 611m height) were introduced to English, American and Japanese scientists. They were all allowed to attend the actual place of the catastrophe and videotape the landscape. Valeri Dvuzhilin contacted his American colleagues; they however weren't much of help. American scientists disproved the assumption that the object had anything to do with American ground breaking technologies. In the end both sides began suspecting KGB.

Indeed KGB had something to do with the crash. Members of the regional committee of the Far East decided to conduct their own investigation. The investigation was mainly triggered by certain rumors of the locals who claimed that KGB was testing some secret weapons.

Back then, thirty three unidentified flying objects were spotted near Dalnegorsk. They hovered at 611 and illuminated the surface. Army guards, navy crews observed the show along with hundreds of local residents. TV and radio stations announced that those were simply “weather conditions.”

Everyone preferred to forget about what happened at 611. However, events of the past year brought the memory back to life. Army guards of the Nakhodka region spotted a UFO. The object was located at 25 kilometers away from Dalnegorsk. This triangular-shpade machine equipped with six engines was moving quietly, hovering above sea and dry land. It disappeared after about an hour.

Afterwards, local fishermen discovered a rather strange substance in water. Interestingly, it was similar to the one found and examined by Dvuzhilin in 1986. Similar alloys were found only in the mountains in places where people witnessed those flying objects.

Another expedition that was sent to the mountains to examine the area more thoroughly detected a major anomaly at the height 611. After the UFO crash, even silicon becomes magnetized in the area.

“We climbed atop the mount together with Valeri Dvuzhilin,” tells leader of the expedition Vadim Chernobrov. “We acquired almost thirty kg of various samples such as metal particles, wood fragments, stones. They were later sent to Moscow along with earlier acquired samples for further analysis. They were examined in several different research centers for more objective results.”

Preliminary analysis yielded sensational results: those were neither traces of natural cataclysms, nor products of earthly technologies. The place at 611 m is the world's only place with distinct traces of the UFO landing.

Vadim Chernobrov assumes that there was not quite a crash but rather a rather bad landing. According to Dvuzhilin, Dalnegorsk attracts UFOs due to some unique fields of rare metals. If this is true, then another visit is not that far off…