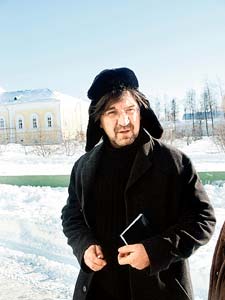 First channel will air a documentary about 1000 years of Christianity in Russia to commemorate 75th anniversary of Russian Patriarch Alexei II.

If someone had ever mentioned that the famous rock musician will visit sacred places and take part in filming a movie-postcard for the Patriarch himself, it would have been considered a joke. Times change however and so do people.

Filming takes place in various sacred places across Russia. The working title of the movie is “A 1000 year history of the Russian Orthodox Church”.

Famous rock musician, leader of the “DDT” rock band Yuri Shevchuk arrived at the hotel yesterday. The first thing he unpacked from his suitcase was a thick book devoted to the life of St. Serafin Sorovsky. Yuri will need to talk about the old man's life in the film. “I am overwhelmed. There is so much that needs to be done here,” says Yuri. “I have to memorize so many lines in just two days.”

Production team barely had enough time to eat. They hurried to the monastery of Troitsk. “It is probably a sin to walk into a monastery with a camera,” remarks Shevchuk. “But all of this is done with good intentions.”

Shevchuk did not forget to light a candle before Sorovsky's icon. “I will also take a few bottles of holy water with me,” says the musician.

-Yuri, why are you taking part in this project?

-Remember a saying, “Opium for the masses”? Today, there is no religion; only opium is left…Young generation enjoys nothing but drugs, and mentally retarded pop-culture. I do not want people to become brainless vegetables. It is through this film that I will attempt to tell everyone about the immense love and enlightenment.

The film is planned to be a present for Russian Patriarch's 75th anniversary. The film will be aired on the First channel.