A 52-year-old woman cannot prove she is alive 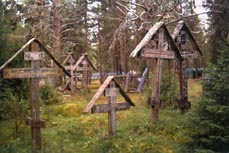 Tatyana Rumyantseva, 52, from the Russian city of Kineshma was stabbed in a local den in February 2003 and then buried at a local cemetery. However, the woman is still alive and even took part in a live interview of Russia President Vladimir Putin at the end of 2003.

I met Tatyana Rumyantseva at the railway station of Kineshma and the woman said that she had to go for work at the local market. The woman told the story of her "death". It was quite accidental that she learnt about her death. She regularly paid the rent for the apartment and suddenly noticed that amount of the rent started slowly increasing one day. It was also strange that according to the bills Tatyana received there were no people officially registered in the apartment. She told her daughter about the strange fact and both women decided it was a computer mistake. However, when the woman received another bill the sum of the rent doubled and the number of people registered in the apartment still remained zero. Tatyana got anxious and called the housing department issuing the bills. She was shocked when she was told the information in the bill was correct because Tatyana Rumyantseva who used to live in the apartment was already dead! So, the woman was told she was no longer alive and did not know how to respond. What is more, the housing department called the passport bureau and made sure that the woman with the name was actually dead.

The woman had a sleepless night and in the morning went to the bureau for registration of people's civil status to find out the truth about her personal status. Tatyana was even more shocked when officials in the bureau presented a death certificate saying that Tatyana Rumyantseva (the date of birth and other personal data coincided with those of the woman's) was stabbed to death in February 2003. However, nobody knew who had buried the woman. Officials in the bureau told her to go to the police, then she went to the prosecutor's office, but she found out just few details of her own death.

Tatyana told that one apartment in the city's Ostrovsky Street was known as a den popular among local hobos. In February 2003, six people were severely killed in that apartment. A woman with the same name that the hero of the story was among the victims. There are several women named Tatyana Rumyantseva living in the city, that is why the mistake occurred at all. The killed woman was identified with the help of her friend, as the victim had no documents. As it turned later, the victim was 17 years younger that Tatyana Rumyantseva, the hero of the story. To all appearances, the woman's age was determined approximately and consequently she was buried as a quite different person.

It is only now that Tatyana takes the whole of the absurd story easy, at first she shed so much tears. She experienced such deep nervous shock that even her leg failed and the woman could not walk.

Tatyana was so naïve when she believed she would be soon rehabilitated as living. Indeed, she was alive and still held her passport. However, as she realized later, once dead one can hardly revive. There was hardly an authority that knew how to get out of the unusual situation. Neither the bureau for civil status registration, neither the police or the funeral office agreed to shoulder the responsibility for the absurd incident. The pension service and the fiscal department considered Tatyana Rumyantseva as dead for a rather long period already. That was strange, but according to the records of the passport bureau, the woman was dead and alive at the same time. In April 2003, the housing board officially registered Tatyana was not living in her apartment as she was dead.

Tatyana Rumyantseva was buried at one of the local cemeteries. Last winter was particularly cold and Tatyana's grave was dug out close to the bog where the soil was softer. The government covered spending on the woman's funeral. Now the grave looks absolutely deserted. A cemetery watchman tells that only a priest and a funeral agent were present at Tatyana's funeral.

Even though the whole of the story sounds funny, sometimes Tatyana Rumyantseva feels rather scared. There is an omen that a man will live long if by some mistake he is considered dead during his life. However, it is still mystery for the woman how it happened so that many departments and authorities of the city registered her as dead but none ever guessed to come to her apartment and see who regularly settled bills. It is a pity that nobody has come to the woman to apologize for the absurd mistake.

Author`s name Michael Simpson
18:54
Ukrainian soldier uses chainsaw and fire to release US howitzer from ice trap
18:30
Onet: Ukraine will lose in six months due to shell shortage
14:17
Russians buy more than 50 tons of gold in 2022
13:34
USA's plan to give 20 percent of Ukraine for peace hoax
19:57
Russia will use all of its military potential to counter Western arms supplies to Kyiv
18:34
Biden changing strategy on Ukraine to reach diplomatic solution with Russia
17:36
Consequences of NATO's possible supplies of fighter jets to Ukraine get clear
15:16
Ukrainian forces suffer heavy losses while trying to cut across Dnieper
13:35
USA's next step is to suppress European economies
12:52
Victoria Nuland turns herself in about Nord Stream blasts
Medvedev: Ukraine as a state to be devastated, go bankrupt and be turned into colony