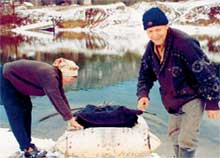 Many years ago, when she was a schoolkid, a Divnogorsk girl Katya told her future husband: "When I grow up, I will live with you!"

Today Katerina Titkova (27 years old) and Valentine Panin (75 years old) do not see anything unusual in their marriage. They say they just found each other. Living in solitude on the bank of Mana river opposite Divnogorsk, they are satisfied with their lot. The couple's greatest joy is their three beautiful children: six years old Adelina, Timofey and Nina, who is only three years.

Katya was an orphan. Older brothers were her father and mother. From her early ages she had passionately dreamed of a real family. Big, strong and warm.

Katya met Valentine while she was on holidays at Mana river together with her brothers. They were bored at the "civilised" bank, and often went to the "wild" side. There in a small house lived ex-pilot Valentine. They were curious to meet him, and he welcomed them gladly. After the first visit all three agreed, that "A great man this Panin is!"

They became frequent in the pensioner's house. Yet Katya preferred to stay silent during these visits. She comments: "Then I looked at Valentine as at father. But once got brave enough to say: "Valentine Petrovitch! I will grow up and come to live with you, helping you!" He was shocked then, and joked: "Come, of course!" And I did really come…"

The girl did not want to go home, saying "I'm 18 already! I can decide for myself!". And Panin let her stay.

For a long time the old man perceived Katya as daughter, and she addressed him as authority. But slowly their relationships grew into spousal, and Katerina does not sorry for that at all.

"I come to the city sometimes, see my friends, and understand that I am the happiest of them. We talk and then I see that one married an alcoholic, other's husband cheating her, yet other is already divorced. And I live with a good, educated man, who does not drink, doesn't smoke, do everything in the house. We never quarrel. Valentine has never shouted neither at me nor at the kids. What else do I need?"

Many envy Panins' life. They know how to be happy and never give up in grief. One year ago their house got on fire, and most of the food saved for winter was destroyed. They spent that winter in sauna. Did not go to the city, because it would mean losing all their household: chickens, cows, land… Now, while Katya manages household life in sauna, Valentine carries out a new house project, claiming: "I can build another home. Got enough powers, and many friends who can help!"

Says Irina Baranova, Divnogorsk's family, maternity and childhood committee official: "They are good people. It's always joy to hear how their kids address them "Mammy, Daddy!". We provided them the maximum monetary payment. It's clear that it's impossible to live only on pension and "children" money in such a situation! Trying to talk them in to move into municipal house, there're rooms waiting for them. But they are happy and don't want to leave their warm place"