Every winter holiday, be it New Year, Christmas or Epiphany has certain traditions of its own. Their roots go deep into the past. 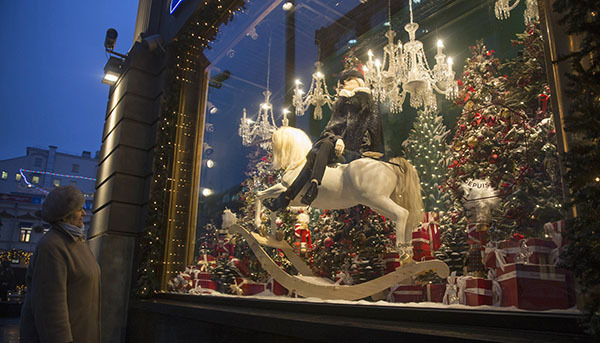 The following holidays are considered traditional winder holidays: New Year (December 31), Christmas (January 7), time from Christmas to Epiphany called Christmas-tide (Rus. “Svyatki”), and Epiphany on January 19. Another holiday entitled the “Tatyana’s Day” (January 25th) has been added to the list in the course of the past century.

Christmas practically coincides with New Year. For many years we have been fooled by celebrating just New Year instead of the Christian holiday. Despite the fact that all of these holidays mentioned earlier constitute an entire cycle of winter fun, each one of them is celebrated differently.

Both New Year and Christmas arrive to our houses much sooner than the first snow, frosted windows, colorful shop windows, and holiday rush. Starting from mid December when people start carrying first Christmas trees, we often begin to feel that holiday rush already.

Up until the XV century, Russia celebrated New Year on March 1. The explanation was quite reasonable. March 1st was considered to be the time of Nature’s awakening. Later, during the XV century, New Year celebration had been transferred to September 1 after an official decree signed by Ioan Vasilievich III. September 1 was the last day of the harvest. 1699 was the last year of Autumn New Year celebration. Afterward, Peter I enacted a decree according to which January 1st marked a year’s beginning.

In the beginning of the XVIII century, great fireworks lit up the Red Square. One chronicler wrote, “Even Peter I himself lit up a rocket which drew a fire serpent in the sky.” Peter the Great has later change the way people celebrated New Year completely.

While putting on the best clothes, we are taking them along with us into our future. In order to be prosperous in the upcoming year, one should wear several new garments.

One of the main features of every household should be a nicely decorated Christmas tree. Aside from decorating it with regular garlands and toys, you should also hang some fruits and candies on your tree. It would also be nice to place several tree branches in the kitchen and hang a festive firry wreath on your front door.

Forget all your quarrels and misfortunes. They are not worth to be taken with you to the next year. Some countries have an ancient tradition: during the first minutes of the new year, people turn of the light and announce the names of those they forgave.

New Year in Russia is a family holiday. In fact, it used to be called Thanksgiving. We give thanks to our destiny for our relatives. We always wish the best there is for our family members. Long time ago, in households of nobility and merchants, people would place holiday cards with best wishes under each other’s plates. Both, old and young generations believed that those wishes will definitely come true if read in the first minutes of a new year.

One can also make a “personal” wish. In fact, there can be up to 12 “personal” wishes for every clock strike. In order to assure the fact that your wish or wishes will come true, you should write down all your wishes on a small piece of paper and as soon as the clock strikes twelve, swallow the paper and drink a  glass of champagne.

Mythical Grandfather Frost accompanied by his granddaughter Snegurochka will be preoccupied with leaving presents under Christmas tree in every household.

New year is a holiday of time’s movement. Lighted candles are considered to be its main symbol. According to Russian tradition, every New year’s table should be decorated with lighted candles.

There are n o limitations in food for New Year celebration. Traditionally, there should be a minimum of 12 dishes on the table.

Carnival is another traditional characteristic of New Year. Not only the actual New Year’s night but the next day as well should be accompanied by fun and exciting games, dances and so on.

Christmas can only be compared to Easter in terms of its importance. However, this holiday has not been celebrated for a long time in Russia. Why? Since ancient times, Russians celebrated Name days and days of Christening. Festivities were held not on the day of a “sinner’s” birthday but on the day of his/her transformation into a “righteous person” by means of the great Mystery of Christening. The same logic applies to the Savior. Therefore, Epiphany is a more ancient holiday. According to the apocryphal legend, bishop of Jerusalem presented the following argument while trying to separate Christmas and Epiphany into two distinctive holidays. “One cannot go to Bethlehem and Jordan at the same time,” meaning the actual place of Christ’s birth and the place where he was baptized.

The moral value of this holiday is human's reconciliation with god. That is why Christmas evenings tend to be more calm and quieter than those of New Year’s. Christmas is usually celebrated in a small circle of family members without any fireworks and full Champaign glasses. This tradition has its own history. Shepherds were the first ones to learn about the child’s birth. An angel delivered the news. Loud conversations and laughter may prevent an angel from being heard.

Your table should be lavishly decorated on this day. In Russia, blue, silver and white colors are considered to be most traditional on such day. Crispy white and blue plates and silverware. Europe sticks to slightly different traditions. Their tables are usually decorated with red, green and golden garments. Also, one should avoid such details as a bit of hay and green grass in order to serve as a reminder of the Savior's place of birth. Gifts should be modest yet wanted.

Christmas Eve precedes Christmas. In Russian, this day is called Sochelnik. The word comes from the word “sochivo”, meaning a fasting dish consisting of wheat or rice cooked mixture with honey or fruits. During the time of Sochelnik, before the first star, this is the only meal a person should consume. This is actually quite healthy, since it allows to sooth digestion after previous loud New Year celebration.

Christmas marks the beginning of Christmas-tide, which lasts 12 days until Epiphany. These are the most remarkable days of the year. People usually invite guests, enjoy each other’s companies, fun activities and masquerades.

Christmas preceded Epiphany—a day of strict fasting. Many sick people impatiently waited for this holiday because water was always consecrated on this day in Churches.

Consecrated Christmas water possesses magical qualities. People usually sprinkle their furniture, clothes and other things in their households with this water. Women wash their faces with this water and in two-three weeks they notice considerable reduction of wrinkles on their faces. One gulp of such water in the morning on an empty stomach is known to cure health-related problems. This water is kept at room temperature all year round and is regarded as a true sanctuary.