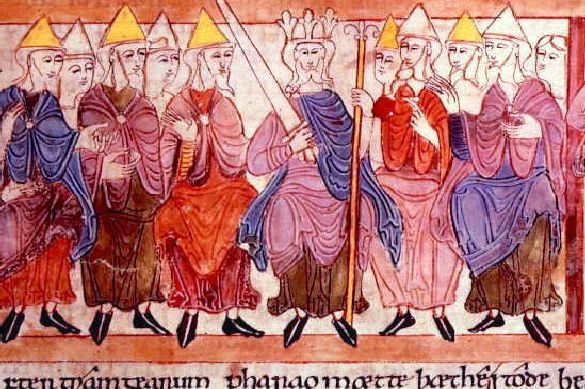 Behold and you shall see the Anglo-Saxonic psyche which provides the spine of the United States of America and its creator, the United Kingdom...

Looking at the USA and its bedboy, the UK, it is interesting to see traces of the psyche of the Anglo-Saxonic backbone which is a constant factor in the equation that constitutes these nations. While the behavior of the UK, which jumps at its master's command and allows NATO to dictate its foreign policy (how legal or democratic is that?) and also the behavior of its bedmaster, the USA, infuriate even the most ardent Anglophiles, the purpose of this article is not to attack but rather to try to understand.

We are not speaking here of the USA's countless wars (acts of mass murder) which have gained the country the "most hated" status, we are not speaking of the UK leaving a literacy rate of 3 per cent in its Indian Territories after 300 years of rule, or its astonishing act of forcibly deporting the entire population of the Chagos Isles and then, even more staggeringly, gassing their pets, yes, I repeat, gassing their pets, before handing over the isles to its bedmaster, which set up the military base of Diego Garcia on them.

The acts are now facts, they happened. Today I am sure while the USA would have no qualms whatsoever about entering a war or bombing campaign against any other country on Earth for whatever reason (Washington after all since the turn of the millennium has proved itself to be the Queen of Liars), I would wager that the United Kingdom would not dare to behave today the way in which it behaved in the past when it had the power and the weapons to mow down defenceless "natives": "Shoot when you see the whites of their eyes, what?" I would also wager that most Britons would be horrified if someone told them the full McCoy about their history.

Nationality stereotypes are the opposite of reality

I have a theory: nationality stereotypes are the exact opposite of what a people as a whole really is. Let's do a few tests. "Russians all get drunk on vodka and Russia invades its neighbours". Totally wrong. Most of the Russians I associate with (and there are many) do not drink alcohol at all, or if they do, very little and Russia has responded to extreme provocations from its neighbours in a measured and mature manner. "The Portuguese are Southern Europeans so they are lazy and disorganized". Totally wrong. Most of the Portuguese I associate with (and there are many) are hard-working, talented, studious, determined, are so well qualified that they are snapped up like hot cakes by the British National Health Service or IT firms and are extremely organized. Look what Portugal has produced from its State School System in recent years: Barroso, the EU President; Guterres, the Secretary-General of the United Nations Organization; many other anonymous Eurocrats with very important positions; Mourinho; Cristiano Ronaldo and so on.

But scratch the surface, and you can see in acts of governance flashes of the original ethnic composition which formed the spine of a nation and here, let us examine not the people, but the governance of the UK and USA, based upon marauding bands of thugs who were the scourge of the peaceful and pleasant Celtic-Roman peoples of Britain (which comes from the Roman name for the Britons, Prettani = the painted ones, those who wear tattooes). The Anglo-Saxons and Jutes came from areas of northern Germany/Denmark where polygamy was practised to the point where women were like factories of babies, permanently pregnant and therefore these areas experienced a population explosion. And since economics underlines each and every geopolitical act, the churches in England, especially, were there for the taking, undefended and super-rich with gold and silver. It was a plunderer's Paradise and the hordes of Angles and Saxons and Jutes came in waves of demonic terror, stealing, murdering, raping, torching until they settled in their own micro-kingdoms. The only times they were defeated was when the Britons called on their Roman friends to send a legion across (which happened several times, although the Romans themselves were having trouble manning their massive borders, the distance problem being coupled with what was probably an epidemic of malaria which saw the population diminish from 70 to 50 million across the Roman World) and one single legion (a force of some six thousand men organized in ten cohorts, each composed of six centuries of 100 soldiers, each commanded by a centurion) was enough to decimate these barbaric savages from Germany.

These micro-kingdoms are invisible today but they are there. Many of England's counties have their borders based almost to the millimetre on the former Anglo-Saxonic Kingdoms, see the names: Middlesex, Sussex, Essex, Wessex (a region)...nothing to do with sex, it is Middle Saxons, South Saxons, East Saxons, West Saxons etc. and East Anglia, Mercia (region) Middle Angles and Northumberland (North Angles).

The kingdoms are there, the psyche has not vanished. The acts of imperialist tyranny perpetrated by Britain over the centuries is a re-enactment of the Lebensraum  and Wanderlust which has often shown its face among Germanic peoples and the USA, before it became the bedmaster, was the bedboy which grew up.

These are horizontal societies. Take for example the typical Brazilian company here. Enter the door and a receptionist will greet you and take you to a coffee area, where you will wait and then be taken to the office of Senhor Doutor (Mr. Doctor) or Senhor Engenheiro (Mr. Engineer) who will be referred to in speech as Mr. Doctor or Mr. Engineer. Walk into an office in the City of London and you will be introduced to "Pete" who has the same position as his Brazilian counterpart.

Compare the handling of Covid-19 in the UK and Portugal, for example, another country I know well. In the former, a complete shambles, with non- Covid patients being mixed up with Covid patients in NHS hospitals, doctors wearing plastic bags over their heads because nobody had bothered to provide enough Personal Protective Equipment, although money for submarines is in ready supply all the time, and doctors admitting that "Covid is everywhere in this hospital", visitors being allowed close contact with Covid patients without being informed the patient had Covid or had been in a ward where Covid was present. A Prime Minister and his Chief Advisor showing a cavalier atitude at best (negligence at worst) seeing both of them infected with the virus, Johnson almost dying from it because he was going around shaking hands and ignoring the potentially fatal nature of the disease. If I was aware of it, why wasn't he?

Portugal, on the other hand, got to grips with the new situation from day #1. It is not for no reason that Portugal is the second oldest country in Europe (after San Marino which gained independence from the Roman Empire in 301 AD). The President,  Professor Marcelo Rebelo de Sousa, working in tandem with Prime Minister António Costa and the General Directorate of Health, led by Dr. Graça Freitas, set out firm guidelines on lockdown at the right time (before mid-March) and most Portuguese showed common sense by imposing their own lockdown before that. Nobody is out demonstrating against lockdown and by and large, people are enforcing social distancing. The result is stats three times better than Sweden which has the same population and 320 cases per 100,000 population against the UK's 417 and New York's 1,911.

A horizontal society like the Anglo-Saxonic ones in which all the men screw all the women and in which the boys go off raping and murdering and plundering overseas creates a psyche based on Wanderlust (the desire to Wander) and Lebensraum (living space). It entails aggressive foreign policies which do not respect local cultures, languages, customs, traditions (ask the Scots, Welsh or Irish who were murdered just for speaking their own languages), ask the Native Americans who were decimated along with their herds of buffalo by murderers with machine guns.

A horizontal society such as the remnants of the Anglo-Saxonic ones in the USA and UK is one which tends to ridicule those who put their heads above the wall and tends to try to shoot down those who are placed on a pedestal. They can claim that this is the exercise of freedom but when the same states use terrorists to implement their evil foreign policies, when the same states ruined countless families across the globe after "civilizing" them with the Bible and the Bullet, when the same states go around gassing pets and throwing the entire population of an island out of their homes and birthplace, when they murder children in Libya and Iran and Syria and declare that they are legitimate targets (such as the Gaddafy grandchildren) when they strafe fields of cereals to starve civilian populations, when they attack electricity grids and water supplies to families "to break their backs" (NATO) then they have lost any moral high ground for centuries to come.

A horizontal society in which everyone is a chum and Dr. Steinway is called "Pete" creates a knee-jerk reflex against imposing orders from above and creates an absence of mechanisms to enforce the law at a Federal level because Anglo-Saxonic societies are basically a federation of micro-states, each one defending its own territory and population and not too keen to be sewn into a Federal network. This has always been the same as we learn from Reading Tacitus' Germanicus, in which, by the way, there is reference by the Romans to "the great continents which lie to the West of the British Isles" (sic)

Therefore we can understand the utter chaos in handling the Covid-19 virus in the UK, which has the worst record in Europe, and the USA, the worst in the world. Quite how the UK is going to handle Brexit after it has spent the war chest built up by Chancellor Hammond and after it has started borrowing record levels of money from the markets is anyone's guess. Without Trump in the White House, a more European-leaning President renders Brexit the UK's worst nightmare. What to expect from a country which only now is thinking about imposing the compulsory use of face masks in public transportation in mid-June? Why not back in mid-March like everybody else?

But like the horizontal society that the United Kingdom is, its governors will always be ready to pick up a sword in Wanderlust and look for Lebensraum, screwing anyone or anything in their path.