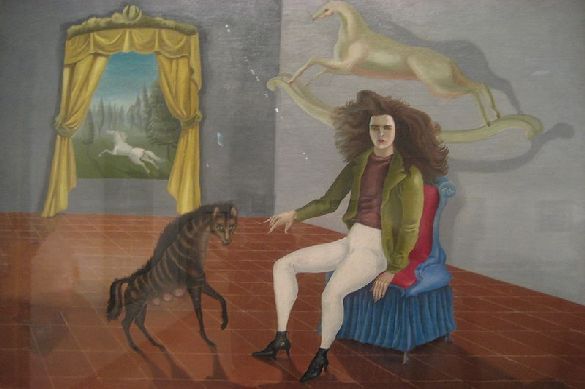 The Bhakti era of seer poets in India was spread over many centuries. Indeed, the role of women in this unique tradition has been exemplary. This has been a  unique channel, where this tradition has allowed, women's sexuality to be denied and transcended or conversely it has led to the sexuality being accepted but channelized towards an accepted God. In both the cases, the more interesting part to be observed is how the feminine sexuality poses a threat to the society specially when she wields it openly, even if only in surrender to the paranormal world, she considers herself to be a part of.

The narrative, interestingly, left behind by these women-poet-seers does point out, that almost all of them idealized the God as male, but it remained outside the rigidity of the patriarchal norms where the God was sometimes an equal-a lover or a husband and at others, the woman remained subservient to the "authority", as with Karaikkal Ammaiyar-who considered Lord Shiv as her father. The tradition of Bhakti, gave women the freedom to reclaim their voices by breaking through the "normal" social barriers of marriage and child bearing and rearing. The women found an ideal companionship in the divine and this, very importantly opened up the possibility of an alternative model of gender relations.

Having spoken about Akka Mahadevi, in an earlier article for this paper, I shall be taking up the life and trail of Karaikkal Ammaiyar. Little known to the people of the outside world, except for those residing in the more traditionally religious and spiritual state of India: Tamil Nadu, Karaikkal Ammaiyar is also known as the 'Saintly Mother of Karaikkal'-the place in Tamil Nadu, where she belonged.

Ammaiyar, belonged to the Nayanmar tradition in the Bhakti cult, the followers of which tradition, considered themselves and all living beings as servants of Lord Shiv. Her poems and hymns, addressed to Lord Shiv, are contained in the eleventh book  of the Tirumurai (The Holy Division)

According to the local narratives, Ammaiyar was the daughter of a rich businessman and her original name was Punitavati. Right from her childhood days, she was deeply devoted to Lord Shiv and the study of religious scriptures. Eventually, she got married to a man from Nagapattinam, but since her parents were reluctant to be parted from her, the couple was persuaded to reside in Karaikkal.

Very early in the marriage, Punitavati's devotion to Lord Shiv was tested, when she gave away one of the two choice mangoes sent home by her husband, for his consumption to a mendicant, begging for food, since she was yet to cook the midday meal. At lunch time, the husband , having eaten one of the two tasty mangoes, asked for the second one too. Punitavati was unable to reveal what had become of it and went in as if to fetch it. Distressed, she sought the feet of Lord Shiv who came to her rescue and she found a mango in her hand. She served it to her husband, but its absolutely unique taste made him to seek an explanation from Punitavati, who revealed the truth to him. Unconvinced by her explanation, the husband mockingly proceeded to test her powers. Punitavati provided him with a demonstration by giving him yet another mango, and he became absolutely frightened.

He was deeply disturbed by his wife's divine powers and was convinced that she was no ordinary woman. At the next first opportunity he ran away from home, leaving her in a lurch, to marry another woman, with whom he had a daughter, whom he named Punitavati-after his first wife!

Later on, Punitavati's family having found out his whereabouts, did take her to her husband, who fell at her feet and proclaimed to the world that she was an extraordinary woman and that, he cannot continue to have "normal" marital relations with her. Immediately, Punitavati prayed to Lord Shiv, telling Him, that since he husband did not need her anymore and that he had 'released' her, she now, no longer needed the beauty of form. She asked the Lord, to transform her into a demoness, who could 'stand by God in prayer', like the ghouls, who worship at Shiv's feet in the cremation grounds. Lord Shiv fulfilled her wish and the beautiful Punitavati was metamorphosed into the emaciated figure , now known to the world as  Karaikkal Ammaiyar.

No longer, a captive to her beauty and youth, she moved free and the world fled from her. Undaunted, she went to Mount Kailash, the abode of Lord Shiv and Parvati and begged for an end to rebirth. She also requested, that in her present birth and form, she be devoted to the Lord. It is believed that even Parvati, Lord Shiv's consort, who had been through great austerities to gain Him as her husband, was surprised at the child like devotion of Ammaiyar.

The latter set whole new standards of renunciation and devotion, of freedom and courage, of morality and divinity. Lord Shiv, welcomed her with love and understanding and she called him appa(father). He then, directed her to go to Tiruvalankatu, the sacred banyan forest, where she would eventually see Him dancing the Tandava . She obeyed and identifying herself as a ghoul, inhabiting the cremation grounds. She sang:

Has this female ghoul...

She lingers, weeps and wails

And wanders aimless in the forest---

There, holding fire , but cool of limbs

With matted hair, in all directions

Is the home of our supreme Lord."

Her poems are not set to music, nor are they chanted in temples, having been too "strange" for inclusion in the normal rituals of worship. But the unique evolution of her consciousness to transcend the barriers of the known, to enter into what the world believes to be scary, and the courage to embrace the "ugly" in sheer love, has hugely impacted the trajectory of the mystic world, that can never ever forget Ammaiyar's contribution to itself. Ammaiyar's devotion was spiritual, not religious....and it saw love as the precondition to the evolution of the Self.

Ammaiyar lives on in the collective memory of the people, not only as one of the sixty three Nayanmar saints in the Indian Bhakti tradition, but is celebrated as the first  saint poet among them. She also has the honour of being the first woman saint poet in this tradition of India. Traced to around the sixth century.B.C, all the other women saint poets came after her. Her devotional compositions were preserved and canonized. Her statues adorn several temples in Tamil Nadu and her life is celebrated through annual festivals, held in the state.

A film was made on Karaikkal Ammaiyar in 1973, by AP Nagarajan. Though the film is commercial in nature, it yet remains a precious document, recording the life of Ammaiyar. In addition to the ritualistic commemoration her story is amply available on platforms such as YouTube, even as her works await translations to be carried forth to the world.

Author`s name Sheeba Rakesh
14:50
Number of foreign mercenaries in Ukraine continues growing
14:17
Russians buy more than 50 tons of gold in 2022
13:57
Russia will not talk to Ukraine. Russia will talk to the West
13:34
USA's plan to give 20 percent of Ukraine for peace hoax
12:51
Medvedev: Ukraine as a state to be devastated, go bankrupt and be turned into colony
18:34
Biden changing strategy on Ukraine to reach diplomatic solution with Russia
13:35
USA's next step is to suppress European economies
12:28
Moscow wants to push Ukrainian troops away from Russian territories
19:55
US eco activist arrested for walking calf on Red Square
19:06
Putin speaks about the shelling of Russian regions
Ukrainian forces suffer heavy losses while trying to cut across Dnieper