In Belarus, a family couple, who lost their child 20 years ago, finally reunited with their daughter. The girl, who disappeared in a commuter train, found herself in a boarding school in Russia. It became possible to establish the girl's identity and her origin. 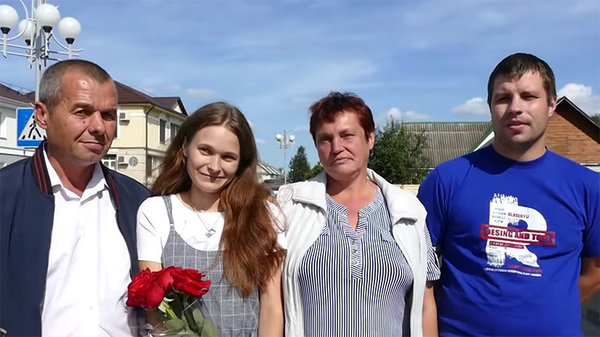 The girl, named only as Yulia, is now 24 years old. She got lost in 1999 as she was traveling by train from Minsk (the capital of Belarus) to the town of Osipovichi. On October 1, Yulia's father went to the market to sell potatoes, and she persuaded him to take with him. The man and his daughter took the last night train to Osipovichi. As the two were traveling back home, the man was attacked and beaten senseless. When he came up to his senses, he found that his little daughter was nowhere near.

Yulia's parents were going from one railway station to another for two days in a hope to find the missing child. When they failed to find her, the parents turned to the police.

The police started looking for the missing four-year-old girl literally everywhere. Her photos were plastered at all railway stations, in all trains. Her story received an extensive coverage in the media, but everything was in vain. The police could not find a single clue to her whereabouts.

As it turned out later, Yulia found herself nearly 1,000 kilometers from her home. On October 21, Russian police officers found the girl at Ryazan-2 station. Passport control between Belarus and Russia was abolished in 1995, and a missing child could cross the border easily.

Yet, her case had not been closed. On August 18, 2019, a young man from Russia called the police department in the district center of Pukhovichi in the Minsk region of Belarus. The man told the police about the orphaned 24-year-old woman, whom he loved. He said that the girl spent her childhood living in a boarding school and then in a foster family.

The young man named Ilya tried to find some information about his girlfriend on the Internet. While searching on the net, he found an article that told a similar story about a missing child. He then realised that his girlfriend Yulia was the Yulia that got lost in a train 20 years ago.

The police quickly contacted the young woman. She recollected pieces of her childhood, she remembered that she had a brother and a sister. She also remembered that she was found at the railway station in Ryazan in 1999. Upon request, photographs of the girl were obtained to establish external similarities. Afterwards, a DNA analyses of Yulia and her alleged mother were held. The analyses confirmed motherhood at 99, 999 percent.

Yulia heard from her adoptive parents that in her childhood she had told them stories about a man and a woman who had taken her out of Belarus. "We would beg for money and hide from the police in abandoned buildings," says Yulia. "I remember I did not want to go to the police because we had no documents. I was scared of police officers even when I was living with my foster parents. This fear always haunted me," Yulia said.

In Ryazan, the man who accompanied the girl dropped her off the train when she asked to go to the toilet. "He put me down right on tracks, and then a police officer approached us. That's how they took me," the girl said. She believes that her companions were gypsies.

According to Yulia, Russian police officers assumed that the girl's parents left her on the station. "It never occurred to anyone to find some information about me in Belarus, even though I would often say some words in the Belarusian language. They did not pay attention to it," Yulia said.

In Ryazan, Yulia finished school and then started studying for a commodity expert. She has a daughter from her first marriage. The girl constantly tried to find her biological parents, but to no avail.