Russians protest against construction of Orthodox church in Yekaterinburg

Yevgeny Kuyvashev, the Governor of the Sverdlovsk Region (with capital city Yekaterinburg), commented on the spontaneous act of protest, which took place in defense of the public garden near the Drama Theater in Yekaterinburg. The protest sparked on May 13 and lasted the whole night till the morning of May 14. The governor wrote a post on his Instagram account, in which he called the action "a difficult situation." 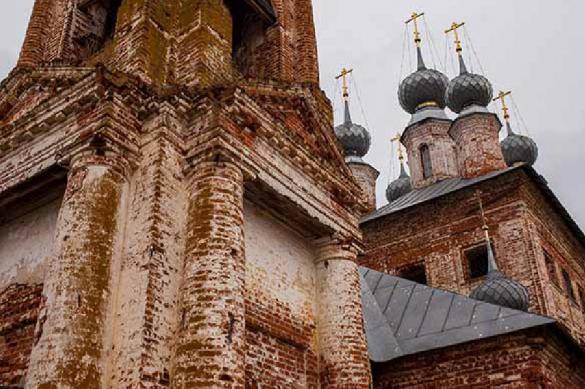 "In this situation, one can understand the believers, for whom the restoration of the Church of St. Catherine in the city is a question that rises from year to year and that still needs to be resolved. One can also understand the protesting citizens, for whom it is important to preserve every green tree in the center of Yekaterinburg," the head of the region wrote adding that he was ready to mediate in the negotiations between the two parties in order to "achieve peace, calmness and understanding."

On May 13, individuals standing in defence of the public garden near the Drama Theatre of Yekaterinburg started posting messages on social networks appealing to those indifferent to the problem to come to the building of the Drama Theatre for a meeting at about 7 p.m.

Many people brought their children, some arrived on bicycles and scooters. People gathered to discuss the construction project. In the afternoon, activist Alena Smyshlyaeva was detained after she climbed over the fence and then up a tree. She was later released.

About an hour later, at 8 p.m. the protesters came close to the fence and pushed the flimsy enclosure down. Russian Guards fighters, who were on duty behind the fence, gathered around a tent in the center of the public garden. People suggested that there was the first brick for the church of St. Catherine inside the tent for a solemn construction start ceremony. The people started circle-dancing around the tent. They later put up one of their own and said that they would spend the whole night in the garden to prevent the beginning of the construction of the temple.

Nothing was happening for the next few hours. As night fell, fighters of RMK martial arts academy appeared in the public garden. The head of the RMK, Igor Altushkin, is an initiator and a sponsor of the construction of the Church of St. Catherine.

The fighters started pushing the townspeople out of the construction perimeter. They broke a camera of a group of journalists who were on the scene, some people said that they were beaten. The fighters put the fence back up and encircled the construction site, sporadically fighting with some of the protesters. The fighters were chanting "For the temple!" while the people were responding to them chanting "For the garden!" and "Shame!"

The police chose to watch what was happening from their vehicles. They did not interfere. Closer to midnight, law-enforcement officers started asking the townspeople to leave the site and go home. It was noted that neither police officers nor OMON fighters made any attempts to protect the townspeople from aggressive RMK athletes, who were obviously prepared for physical violence.

The conflict ended at about 2 a.m. when all of the protesters left. It was said that the police arrested four participants of the act. It was also said that an employee of private security company RMK Security used pepper spray against a female activist, for which he was arrested.

The Yekaterinburg diocese of the Russian Orthodox Church plans to build a church of St. Catherine on the site of a public garden near the Drama Theater. The restoration of the temple, which was destroyed in 1930, has been discussed since 2010. At first it was planned to build it on Labor Square and then on the embankment island in the area of the city pond. Both variants of the project caused mass public protests, and the ideas were abandoned.

In early 2018, Yevgeny Kuyvashev, the Governor of the Sverdlovsk Region, announced the plan to move the construction site to the embankment near the Drama Theater. Yekaterinburg Mayor Alexander Vysokinsky approved land planning and surveying. The temple is to be built for the 300th anniversary of the city in 2023.