Thanks in part to the overt racism and sexism of Donald Trump, there have been numerous discussions about these issues and their prevalence in American culture.  On an almost weekly basis, websites are flooded with stories about people who espouse racist or sexist views in public, on social media, and at the ballot box. 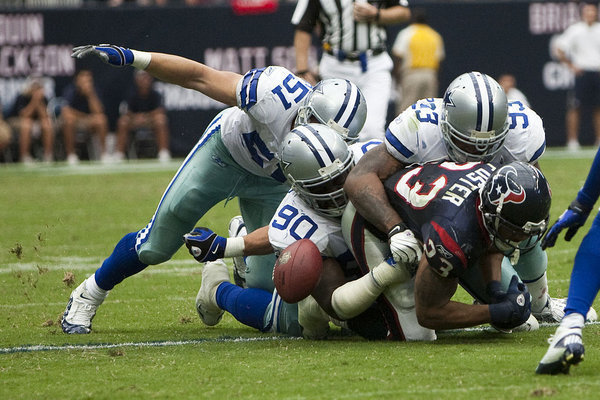 Whenever such incidents occur, Internet news sites are usually quick to condemn offenders, who sometimes suffer such consequences as loss of employment, eviction, and even criminal charges.

But there is an unspoken adage in America, and indeed in any capitalist country:  Wrap evils in enough money, and they cease to be viewed as evils.

This is especially true when "mainstream" (corporate-controlled) media profit from an evil.  Those who doubt this need only look at the incestuous relationship between the National Football League (NFL) and the corporate-controlled media.

This is why, even though the hierarchy in the NFL contains some of the worst racists and sexists in the world, the corporate-controlled media are more than willing to perpetuate illusions about the so-called "honor" and "nobility" of the game.

When former quarterback Colin Kaepernick was first blacklisted from the league for kneeling during the playing of the national anthem to protest racial injustice, there was a significant amount of coverage about the NFL's own racism and hypocrisy.  But, going into the second year of this blacklist, more and more articles are appearing about how the NFL's ratings have rebounded, and/or how the "Kaepernick controversy," and the protests it engendered, have been all but forgotten.

But boys will be boys, and racists will be racists, which means the NFL, through its own inane actions, often reminds us about the egregiousness of Kaepernick's blacklisting.

Most recently, one of the NFL's most virulent racists, and all around vile human beings, Daniel Snyder (and that is saying a lot given that the NFL hierarchy contains people like Jerry Jones, Terrence Pegula, Mike Brown, John Elway, Tom Coughlin, Bruce Allen and a plethora of others), chose to sign an inferior quarterback, after his team's starting quarterback was injured, instead of even considering giving Kaepernick a tryout.

This is not surprising, given Snyder's intransigent refusal to change his team's nickname, which is a derogatory slur against Native-Americans.  (To avoid using this nickname, I will dub his team THE RACISTS).  Even more despicable, Snyder has the audacity to claim this opprobrium is actually an "honor."

In a way, Snyder and Allen might have done Kaepernick a favor by not signing him as I'm certain many people would have been eager to point out how his concern for racial justice could be called into question if he played for a team with a racist nickname.

As I was pondering how such racism and blacklisting could flourish when roughly seventy percent of NFL players are African-American, I began to analogize the mentality of the NFL hierarchy to the mentality of former slave owners in America.  Yet I was somewhat reluctant to discuss these thoughts, since there is more tolerance towards those who sugarcoat social problems than those who bluntly and honestly discuss them.

Fortunately, I stumbled across an excellent article by Blue Telusma in THE GRIO entitled, Mandingos vs. Activists (11/30/2018).  While I highly recommend that readers peruse this article for themselves, his thesis mirrored my own:  That the NFL stereotypes its players, particularly African-American players, as some type of subspecies that is supposed to be physically aggressive, but mentally compliant.

In his article, Telusma contrasted the blacklisting of Kaepernick, who has donated more than a million dollars of his own money to promote racial justice, to THE RACISTS' hiring of Reuben Foster roughly four days after Foster was arrested for domestic violence and released by another NFL team.  As Telusma so perfectly stated, if the allegations against Foster are proven true, "the NFL embraced him back quicker than that poor lady's bruises could even heal."

If there is such a thing as the proverbial "bottom of the barrel," THE RACISTS and the NFL certainly have not found it.  Almost immediately after Foster's hiring, Doug Williams, the first African-American quarterback to win the Super Bowl and current vice president of THE RACISTS, tarnished his legacy forever by calling the allegations against Foster "small potatoes."

So, let's review:  protest for and donate a million dollars to support human rights and racial justice equals blacklisting, while abusing a woman equals gainful employment.

But the NFL wasn't done yet.  Shortly after Foster's hiring, a video was released by TMZ showing Kareem Hunt of the Kansas City Chiefs, "shoving and kicking a woman in a hotel."  What is most disturbing is that the NFL had been aware of this incident since February, yet, until the video's release, Hunt had been allowed to play the entire season.

I had been boycotting the NFL a couple of years before Kaepernick's protests, primarily because of poor officiating and what appeared to be league favoritism towards teams that drew stronger ratings.  But I'll admit my boycott was difficult to sustain, and I would often drift back into wanting to spend the entirety of my Sundays, as well as my Monday (and now Thursday) nights, watching games.

But the NFL's treatment of Kaepernick strengthened my resolve, and the events described above have made my commitment ironclad.

Thanks to Colin Kaepernick, I no longer waste hours of my life watching a league that views a majority of its players as subhuman, and openly and unabashedly displays its racism and misogyny.

I no longer waste money on NFL products, and on the products of those who sponsor and/or promote it, since I now know that my dollars are being used to enrich racists and those who view violence against women as "small potatoes."

I hope you will join in this boycott, and I hope that places where the NFL is now trying to gain a foothold, like Mexico and England, will awaken to the despicable and hypocritical organization and individuals they are inviting into their countries.

As Blue Telusma so accurately puts it when opining why the NFL hierarchy blacklists players with consciences while abusers of women are hired without compunction, "The answer is a tale as old as time, and a song as old as Jim Crow: the NFL may not have room for civic minded activists, but it has never (and probably will never) have a problem embracing Mandingos."

Thank you Colin Kaeperick for exposing these truths to the world.