Forty years ago, Soviet pilots shot down a Korean passenger aircraft after it invaded Soviet airspace. On April 20, 1978, Boeing 707-321B passenger aircraft of Korean Air Lines (South Korea) was flying from Paris to Seoul with an intermediate stop in Anchorage. There were 97 passengers and 12 crew members on board. 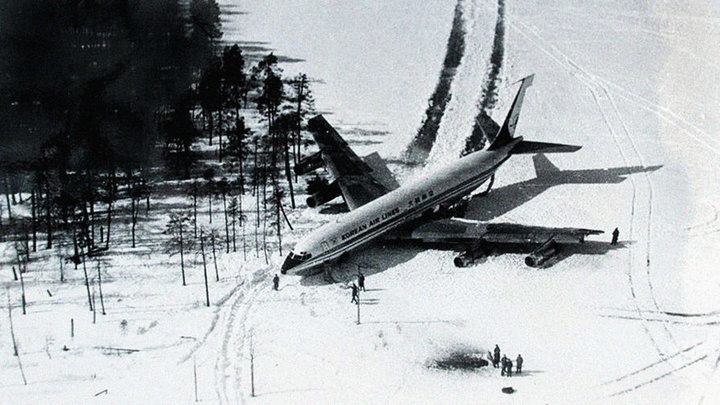 The flight route was lying over the northern part of Greenland and Canada, and then the airliner was supposed to fly over Alaska and head to Anchorage. However, instead, the Boeing allegedly deviated from the course due to a piloting error and headed through the Svalbard archipelago towards the Finnish-Soviet border.

In April 1978, the USSR was conducting large-scale exercises on ​​the Kola Peninsula. The exercises were held around the city of Severomorsk. The city had the reputation of one of the most closed settlements in the USSR as it was a key location for a number of naval bases and command centers. In addition, many of Soviet strategic bomber planes and reconnaissance aircraft were based on the Kola Peninsula as well.

"I was conducting exercises with the 23rd Air Defense Division," Vladimir Dmitriev, retired Colonel-General recollects. "That day all was going as usual, all planes were grounded and we went home. As soon as I opened the door, the phone rang and the duty officer, Colonel Samoilov, reported that there was an aircraft 300 kilometers away. He said that the aircraft wasn't responding to radio signals, it was heading towards Severomorsk at the speed of 900 km/h and an altitude of 10,000 meters."

A Sukhoi Su-15 fighter aircraft took off first to intercept the Boring. The pilot, Alexander Bosov, later reported that he saw hieroglyphics on the fuselage, but he could not understand whether it was a passenger airplane. Bosov approached the aircraft closer and dipped its wings, but the Boeing did not respond. According to other data, however, the Boeing commander turned the landing lights on.

The Boeing turned towards Finland. There were a few minutes left for it to cross the border. However, it would have been utterly shameful for the Soviet military to lose the aircraft that had flown above Soviet military objects, let along the fact that it could be a spy plane.

An order was given to shoot down the intruder.

"If we hadn't taken those measures, we wouldn't have accomplished the combat mission. The Soviet Union was conducting large-scale exercises at that moment. The aircraft would have disappeared in six minutes. We all would have been excluded from the party and fired from the armed forces. I ordered to destroy the aircraft that invaded Soviet airspace. The pilot asked whether he had to shoot the plane down. I repeated to him that it should be destroyed," Dmitry Tsarkov said. In 1978, he served as the commander of the 21st Corps of the Air Defense of the USSR.

At 21:42, Bosov fired an air-to-air missile with a thermal homing head at the plane. The missile struck the wing of the plane, having destroyed the port-outer engine. Missile fragments caused the fuselage to depressurize. The Boeing started spiraling down fast, and Bosov lost the aircraft out of sight.

A part of the wing came off the aircraft, but the Soviet military assumed that the wing fragment was another target, possibly a bomb or a missile. Another Soviet pilot opened fire at the fragment to "destroy" it.

Bosov's aircraft was running out of fuel, and another Su-15 piloted by Captain Anatoly Kerefov came to replace him.

Kerefov reported that the South Korean aircraft circled the area several times looking for a landing site and decided to continue flying in the direction of Finland. The pilot transmitted commands to South Korean pilots in English three times.

"I approached the intruder from the left side, from the side of the commander of the crew, I maneuvered accordingly - I made a turn to block the course of the plane towards our airfield. He seemed not to have noticed me, he just carried on. I reported to the base that the object was not executing the command. I passed in front of his nose with the afterburner on to make him follow my commands. Yet, the intruder went in a different direction. At one point, I was behind him and I took a position for an attack. "The object does not execute the commands, may I have the permission to destroy the target?" I asked the commanders. They replied: "Wait a minute." In about a minute, they ordered to force the intruder to land," Kerefov said.

Having noticed a large white spot on the ground, Kerefov realized that they were flying above a frozen lake. Kerefov approached the Boeing and tried to cover its left wing with the right wing of the fighter jet. The pilot of the Boeing had to direct the plane to the ground to avoid collision.

At 23:05, the Boeing landed on the ice of Lake Korpiyarvi near the village of Louhi in Karelia. A Soviet search group found it soon afterwards.

One of the passengers was killed by the missile. Another one was seriously injured and died on the way to hospital. Thirteen people received non-fatal injuries.

"It was something unreal," KGB investigator Valery Desyatkov recalls. "It was all in the wild of Karelian taiga. There was a small frozen lake and a huge airliner on it. The passengers were evacuated and we entered the aircraft. On the left side of the plane there were not less than a hundred shrapnel holes. Oxygen masks were hanging above each seat. Blood was everywhere, but it was not because of the wounds - it was because of the pressure drop. When the plane began to descend sharply, people had blood flowing from their noses and ears."

Male and female passengers were accommodated separately in the town of Kem. No one was allowed to use any means of communication. The passengers recovered from shock quickly and started interacting with each other.

"There were representatives of many nations on the plane, but after the crash we became one big nation. Maybe it will be useful to put many high-ranking politicians on one plane and then arrange an air crash for them," one of the surviving passengers, Karlheinz Schwacken of Germany said.

Two days later, the passengers were delivered to Helsinki.