Celebrations of the Day of Airborne Troops receive extensive media attention in Russia every year on August 2. This year, everything would have been as usual, if it was not for a report prepared by NTV channel. In the live report, a drunk man approached the journalist, who was reporting about celebrations of the Day of Airborne Troops in Moscow's Gorky Park, and punched the journalist in the face in front of the camera. 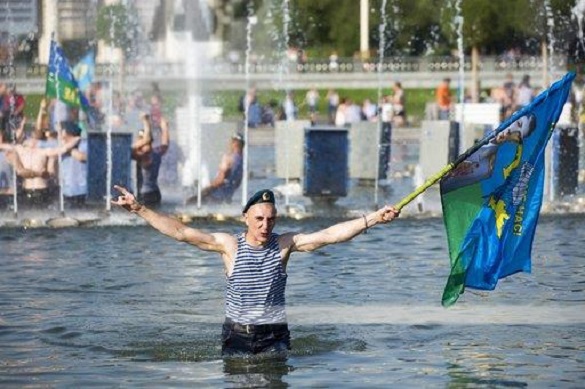 The incident triggered heated discussions in the society and led to reactions in law-enforcement agencies.

It was later said that the man, who punched the journalist in the face, had nothing in common with Airborne Troops. He was arrested and then released. The attacker's lawyer apologized to the journalist.

Let us go back to Russian traditions of celebrating the Day of Airborne Troops.

The behavior of some people, who have found themselves in the ranks of airborne troops, has discredited the day of an elite army unit. Also, it is unclear why the media pay so much attention to the form of festivities, in which servicemen drink in public, strip to their underwear, dive into city fountains snd try to smash beer bottles on their heads. Strangely enough, Russian media find this form of behavior acceptable and provide joyful reports about the holiday.

If this form of festivities requires a higher level of security measures, the mobilization of units of the National Guard due to risks of antisocial behavior on the part of drunk and aggressive men, does the society need celebrations of the day of the paratroopers?

Celebrations of the Day of Airborne Troops are not supposed to raise any anxiety and concerns among common people, whether it goes about children or pensioners. There are many other ways, in which Russian commandoes can demonstrate their skills, strength and courage. Those who serve in airborne or any other troops, are supposed to give other people the feeling of pride and protection, rather than fear and disdain.