Gzhel, Khokhloma...Do Russian folk arts and crafts have a future?

The number of craftsmen - the keepers of age-old secrets of craftsmanship in the post-perestroika Russia has decreased more than five times. Does the world still remember such Russian renowned folk brands as Gzhel, Khokhloma, Dulevo, Verbilki, Zhostovo? Pravda.Ru meets Chairman of the Board of "National Art Crafts of Russia" association, Gennady Drozhzhin, to talk about the place of Russian folk crafts in the modern world. 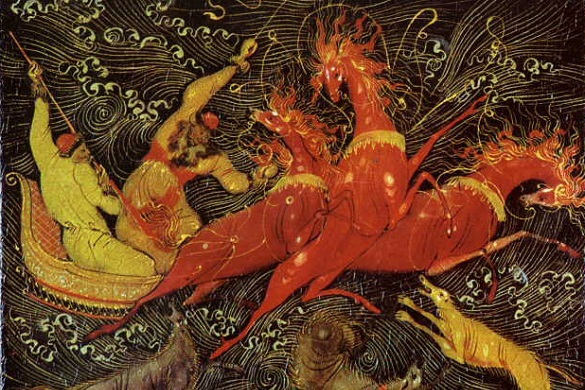 "In the past, folk crafts used to help peasants make their living. What has folk craft become today?"

"Russia is one of the few countries that has preserved traditions of folk arts and crafts. They are not only a part of Russia's national treasure but also a part of the cultural heritage of the world. They have survived all wars and revolutions, and they still live today.

"These brands are worthy of any museum. Historically, Russian folk arts and crafts had been developing in virtually every region of Russia. Lacquered miniature - in Palekh, Fedoskino, Mstera. Weapons finishing in Zlatoust and Tula. There's the Rostov enamel. Lacework in Vologda, Yelets. Khokhloma is known as wood painting. Many people also know Zhostovo trays. There are also such arts as Bogorodsky carved toys. The North Caucasus - Untsukul, Kubachi, Balkhar, Kizlyar - these regions are known for silver and weapons, pottery, painting and carpets.

"It is difficult even to list all the wealth that we have inherited. It requires a huge talent to create a unique work of art - its takes a craftsman months to do something. Artists do put their heart and soul into their work. Folk craft today is primarily about spirituality and inspiration. Folk crafts emerged as a way of making money. Afterwards, successful crafts evolve into the level of art.

Earlier, in Soviet times, the state used to prove serious support for applied folk art and crafts. Russian folk crafts were booming during the times of the USSR. There were more than 100,000- craftsmen and artists, whose products enjoyed great demand abroad.

"There were specialized international trade organizations that were distributing it all. After the collapse of the Soviet Union, when everything literally collapsed, folk arts and crafts, like everything else, found themselves in a terrible situation. I would not say that they have started to develop successfully today, but the situation has improved greatly. Foreigners are again very much interested in Russian folk arts and crafts."

"Do you mean that foreigners lost their interest in these things a while back, but then they became interested again?"

"Yes, it goes for both the country and folk arts. We have requests from embassies of several countries - they ask us to arrange exhibitions of Russian folk arts and crafts in Mexico, in Europe, particularly in Portugal. Yet, the main question is the development of marketing infrastructure.

"In Moscow, there are only a couple of specialized shops only. The situation in other regions of Russia is just as sad, except, perhaps, for the Nizhny Novgorod region, where there were two tourist clusters created - in Khokhloma and in Gorodets.

"On December 14, we are opening our largest exhibition in Europe in Moscow, at Expocenter on Krasnaya Presnya. There will be ​​20,000 square meters taken to showcase the works from 65 subjects  of the Russian Federation."

"What kind of effect do such shows produce?"

"First and foremost, they attract a lot of people. People come not just to see and buy something - they come to learn new things and share experiences. Folk arts and crafts are a conservative form of art, and it is hard for them to enter modern markets. They are unique art products, not just consumer goods.

"Nowadays, young people do not even know what folk arts and crafts Russia is famous for. We have developed a project called "The ABC of folk culture", the presentation of which will take place at the Expocenter in December. As part of this project, we plan to tell children in kindergartens and schools what crafts we have in Russia - both regional and world famous ones - Khokhloma, Gzhel, Fedoskino, Palekh ...

"In the Novgorod region, they revive the Krestetsky line - this is a unique type of embroidery, which is 200 years old. The company that had about seven people employed in the past now has 60 employees. Its current owner is certain that the company will grow to 100 employees soon. In Ryazan, the Kadomsky veniz is developing as well."

"The Kadomsky veniz is an art of needle embroidery, white on white. Legend has it that Peter the Great invited lace-workers from Europe and accommodated them in Kadoma, a monastery, where a distinctive style of embroidery was eventually created - the Kadomsky veniz. In short, this is the highest form of embroidery in the world of art.

"I am convinced that Russia must protect and preserve its folk arts and crafts. In Europe, people do not even understand how we have been able to preserve all this."