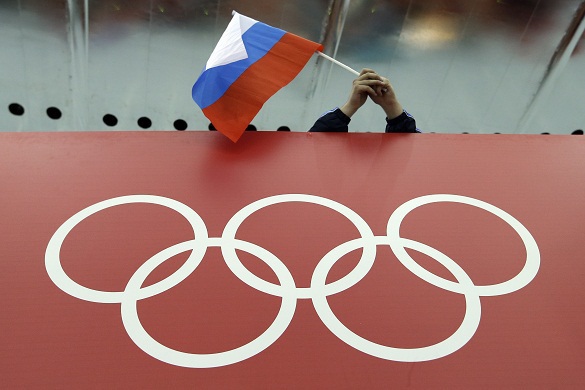 The controversy over Russian athletes has taken the Olympics to a new low. The Olympics seem to be completely devoid of any sportsman spirit and have become open and naked pursuit of greed, arrogance and political maneuvering. Capitalism has completely robbed the Olympics of its original spirit. They were supposed to be promoting camaraderie and goodwill. Instead, they have become a show of greed, jealousy, revenge and hatred towards Russia. Russia has become the biggest target of the Olympics management, which wants to keep as many Russians out of the games as possible.

The big corporations, who control the completely commercialized games, are hovering above a carcass.  Keeping the Russians out means more Olympics medals will be available to American athletes. Each medal represents business opportunities in the form of new advertisement deals worth millions of dollars. Moreover, America needs a credible foreign enemy in order to divert people's attention from the ugly scenes of the Police and Blacks fighting in the streets. In some American cities, the streets became arenas for racial confrontation and can take the form of war zones. Why not take attention off these ugly scenes and focus it on a foreign enemy, Russia? Russia poses a big threat to America so it should be punished by keeping it out of the Olympics.

There are many calls from America for completely banning Russia from the Olympics. Are these calls motivated by keeping the Olympics drug-free or punishing your rival or enemy? It looks more like the result of political vendetta rather than any genuine concern for sports. Russia deserves to be punished because it took over Crimea (which belonged to it any way) and it came to help people in the Eastern Ukraine who happened to speak the Russian language and are of Russian descent. If it did not help them, they could have been wiped out by the ultra-nationalists in Ukraine. Russia should be banned from these games because it is not going along the Hague Tribunal's decision on the South China Sea and even worse, it is joining China in the joint military exercises in the South China Sea.

The drug problem is not a problem of the Russian athletes alone, but is of all the athletes. In the final analysis, this is the problem generated by capitalism itself. Capitalism has commercialized and marketized almost all aspects of our lives. The athletes are under tremendous pressure for their survival as well as to help generate profit for their sponsors. Fear, insecurity, anxiety and stress, the hallmarks of capitalism, affect the competing athletes much more than the average person and pushes them towards drugs. The Russian athletes, like all other athletes, have become victims of capitalism. If we want to properly address the problem, then we cannot single out one country. We should try to get to the root of the problem.

When the Olympics started in ancient Greece, the athletes were as close to their natural state as we can imagine. They were not wearing shoes or even clothes! They were not using any expensive equipment to train. There were no big stadiums with huge banners of their sponsors. They were not on worldwide display by TV channels that have spent billions of dollars for the coverage of the events. I am sure that those athletes were under a lot less pressure to perform than the modern athletes to take drugs. Moreover, the Greeks had no hidden political agenda during the games. America is constantly trying to undermine and combat all challengers and potential challengers to its global hegemony. It could be the Brazilian President, Venezuelan President or it could be Vladimir Putin. Banning the Russian athletes gives the message that Putin is not that powerful after all.

Capitalism promotes exactly the opposite values to the original Olympics values. The original Olympics wanted to promote feelings of togetherness, camaraderie and belonging to a group. Capitalism, on the other hand, makes people extremely individualistic, self-centered and selfish by its phenomenon of alienation. In capitalism, there can be no true feeling of belonging and representing a group like a city, state or country.

Players and athletes are encouraged to become like commodities and they want to sell themselves to the highest bidders. Many good players have managers to do their bidding. Today, they are playing for one team; tomorrow, they may play for the opposite team if that team pays them more. The same is becoming true of states, leagues and even countries. Sports talent can be bought with money. The players and athletes do not feel that they have loyalty to people. Many of them are encouraged to become only careerists and to preserve their self-interest. Some female Olympic medalists have even posed for Playboy magazine.

As capitalism has developed into Globalization, its highest stage, the degradation of human values in general, and values related to sports in particular, is reaching new proportions. Commercialization and marketization of sports and games is also scaling new heights. Corruption and scandals in the sports organization are also setting new records. Globalization has intensified competition for global resources. What we first saw in the recent FIFA World Cup and are now seeing in the Olympics also represents this new phenomenon in Globalization. The drug problem with the athletes is nothing new. This has been there for the past many decades.

The 1988 Summer Olympics in Seoul, South Korea has the dubious distinction of hosting the 100-meter men's final, which has come to be known shamefully as the "dirtiest race in history." Canadian athlete Ben Johnson was stripped of his gold medal by the International Olympics Committee (IOC) after testing positive for steroid use in his post-race drug test. The gold medal was then given to American athlete Carl Lewis, who ironically had tested positive for banned substances at the U.S. Olympic trials, but had been cleared by the U.S. Olympic Committee. The silver medal was given to U.K. athlete Linford Christie, who tested positive for banned substances after a 200-meter heat, but was cleared. In 2013, CBC radio broadcast a documentary on this race and stated that 20 athletes had tested positive for performance-enhancing drugs but were cleared by the IOC; furthermore, according to an IOC official who was interviewed, endocrine profiles done at the games showed that 80% of the track and field athletes were long-term steroid users although most were not banned.

Because of the intense competition generated by Globalization and because of the dehumanization of people by capitalism, any excuse or means to finish off your opponents seems justified. The calls to ban the Russian team from the Olympics are the result of these factors. True Olympic spirit is incompatible with capitalism.