Russia has recently deployed its state-of-the-art Su-35C fighter jet in Syria. The aircraft carries six very powerful  air-to-air short and medium range missiles, as well as two new medium-range RVV-SD missiles with active radar homing heads that are capable of striking targets at a distance of up to 130 km. 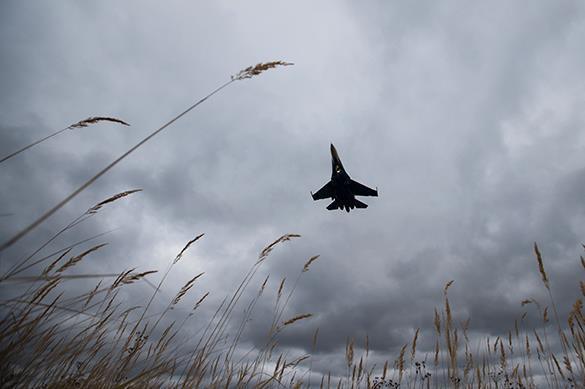 The  Hague Convention from  1907 banned all kinds of aviation weapons, and planes were flying unarmed. A few years before that, In 1899,  the Hague Convention restricted the development of small-caliber automatic guns.

When WWI started, pilots found out that the only weapon that they could shoot from was their revolvers and pistols. Two-seated  airplanes were quickly armed with machine guns, from which a second pilot could shoot. Yet, it was problematic to arm a single-seater. Engineers started mounting machine guns on the wing above the pilot - one had to stand up to shoot from the gun, and it was definitely not a way out.

The first real technical innovation that turned an airplane into a fighter jet was offered by French pilot Roland Garros, whose invention transformed conventional military aircraft of those days into flying machine guns. Garros mounted steel plates in the place, where bullets were passing through the propeller, making some of the bullets ricochet. Afterwards, a synchronizing device was designed that stopped the machine gun from shooting at the moment when the propeller was in front of it. The device made it possible to mount two and three guns on one airplane, and all of them were shooting through the propeller.

During the 1930s, there could be eight and even twelve guns mounted on the wings of fighter jets. They would spew a shower of lead on the enemy, but it became clear soon that bullets were not enough.

Soviet pilots used RS missiles in battles with Japanese aircraft, but those were unguided missiles. During WWII, Soviet and German engineers designed a system of guns that could fire bullets both through the propeller shaft (for water-cooled engines) and through the propeller itself. The English would mount up to four guns in the wings, the Americans would use 4-6 large-caliber machine guns that would destroy enemy aircraft with a shower of bullets. For example, to attack German Me-262 aircraft, American pilots simply had to fire a gun in its direction - they did not need to take aim at the enemy craft.

The Germans created a special jet interceptor Nutter that had no guns at all - it was supposed to destroy US bombers by multiple launches of unguided missiles. The accuracy of those shells was very low. It was German military engineers, who started working on jet guided missiles. Radio and wire controlled shells were invented. The latter were supposed to be used against US flying fortresses, but, luckily for the allies,  the Germans did not have enough time during the war to get them into shape.

A year later, three of those missiles were adopted by the United States and the USSR. The first air battle with the use of guided missiles took place on September 24, 1958, when Taiwan's F-86 fighter aircraft fired AIM-9B Sidewinder at  China's MiG-15 shooting the Chinese airplane down.

The missiles with the heat-seeking guidance system were most widely used. The essence of the technology lies in the ability of the missile to "see" the thermal radiation of the aircraft. One could escape from such missiles by making a maneuver towards the sun or dropping burning decoys that missiles would then destroy.

Afterwards, other guidance systems were developed. The radio guidance system proved to be inefficient, as enemy pilots could use radiointerference to escape from a radio-guided missile. Modern missiles with infra-red guidance can sense even the friction of the body of the aircraft against air.  Missiles with radar homing are capable of striking a circle ten meters in diameter with accuracy of 0.8 - 0.9.