Is there any meat in natural meat? That is the question

Not that long ago, the WHO equated processed meat products to carcinogens, such as cigarettes and arsenic. Some people took the news very seriously and stopped buying such products as sausage, ham, etc. However, is there any meat in natural meat? 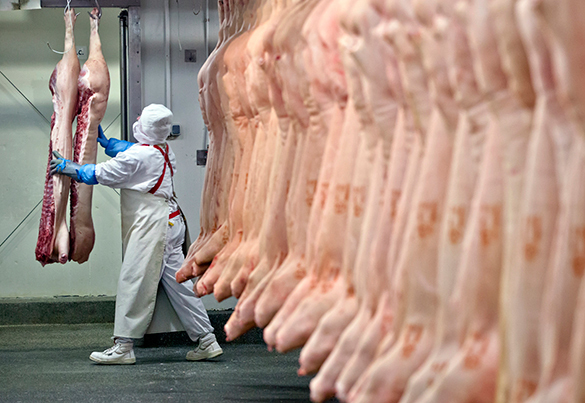 Eating dairy, meat and other animal products, we hardly ever think about the environment where the products came from. This environment does not look like typical scenes from TV commercials - endless green meadows with beautiful mountains in the background, accurate haystacks, crystal clear water in streams and so on. Modern-day industry does not produce animal products in such conditions.

To provide the world population with agricultural products, people create so-called farm-type factories complete with state-of-the-art equipment and technology. Factory farming is a mechanism that works with only one purpose - to produce as much animal product as possible at lowest costs possible.

Needless to say that such a technology does not promise anything good to helpless animals that serve just as raw materials. No one cares a bit about what animals need. Profit, time and investment is all that matters.

This approach has its advantages. For example, the countries that do not have conditions and opportunities for cattle breeding may have a chance to provide citizens with necessary products at a relatively low price. What if the meat of the animals that live in such harsh conditions is not safe for people?

In the United States - the world's No. 1 meat consumer - the situation is as follows. If the Americans release all their cows into the fields, there will be no place for people there. However, cows spend only a small part of their lives in the meadows - just a year or two or even less. As soon as their meadow life ends, the animals are moved to fattening facilities, where their life is far from being cow paradise.

The purpose of such facilities is to prepare high quality raw material for sale. Some of such farm factories are several kilometers long. Animals have to live in cramped environment filled with their own manure. Their food is highly concentrated organic animal feed.

Have you ever thought why calf meat is so delicious and tender? This is because animals can not move freely under such conditions. Their muscles are underdeveloped, which makes their meat soft. Animals do not live and develop normally under such conditions. To reduce the mortality of animals, antibiotics and pesticides are used. These chemicals accelerate the ripening of meat, making it juicy.

As for dairy producers, they prefer first lactation cows. They need to obtain maximum milk yield in the first year of cows' life, before the animal is slaughtered. No one takes care about any kind of comfort for milk cows either.

Having observed the cows that were imported to Russia from EU countries, Russian vets concluded that such animals suffered from a variety of disorders - poor metabolism, damaged hoofs, unhealthy udders, poor wound healing, and so on. To increase milk production, manufacturers resort to chemicals.

The story about pigs and chickens is just as sad. Commercial interest is top priority.

Hormones have been in use in cattle breeding since the middle of the 20th century. The first one was diethylstilbestrol (DES) that originally was used by pregnant women to prevent miscarriages. The hormone had been used for a long time, until unpleasant consequences of the drug were revealed. For example, the hormone leads to such terrible diseases as cancer of the genital tract in girls, various tumors, miscarriages, infertility, and this is not a complete list.

DES affects human health for three generations. Of course, the drug was banned, but there were alternatives found immediately.

Currently, the United States uses six types of hormones that are added to the animal feed or implanted in ears for a more effective contact with the blood of an animal. Despite the fact that the use of such methods to improve agricultural raw materials is prohibited, checking meat for hormone levels is problematic, because natural hormones are indistinguishable from body hormones.

However, food also contributes to our hormonal balance. Scientists have proved that the development of tumors in women is directly related to their consumption of food of animal origin in childhood and adolescence. The more meat and milk we consume at a young age - the greater the risk of developing cancer, even if we do not eat soy flour sausages, smoked sausage made of pig skin and so on.

The use of antibiotics is another problem. Antibiotics are used in relatively high doses, because a large number of animals on factory farms may contribute to rapid dissemination of infections and viruses. Nevertheless, when antibiotics are released into the environment in manure, new types of highly-resistant bacteria may emerge.

Is there a way out? There is no solution. There is no technology to control population growth on the planet, and demand on meat grows steadily. Cattle breeders will never return to the good old-fashioned technology in their work.

In the West, some tend to say no to meat consumption. In Russia, the trend is the opposite. The consumption of meat products increases and the state supports the industrialization of livestock.