Russian Foreign Ministry spokeswoman: Peace is treasure that we need to cherish

The head of the Department of Information and Press of the Russian Foreign Ministry, Maria Zakharova, gave an exclusive interview to Pravda.Ru chief editor Inna Novikova. We sat down with  Maria Zakharova to talk about peace and war, about the complex international situation, the importance of simple human comforts and the ability to experience life's difficulties. 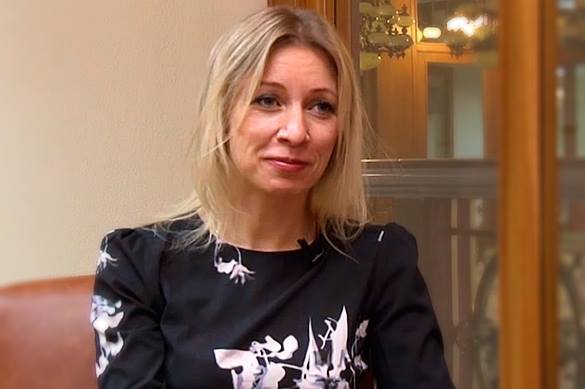 "You are the first woman to take this important post. In these difficult times, you have the whole world looking at you as an official spokeswoman for the Foreign Ministry of the Russian Federation. How does it feel to work under such conditions?"

"It is generally believed that crises contribute to career growth and popularity of public figures. Yet,  I would give everything - my career, all our achievements and strong performance to avoid all the horror that we have been through and where we still stay. I am talking about the Ukrainian crisis, Syria and other events. It is a huge mistake to think that we enjoy being in all sorts of conflicts."

"We all want to live in quiet times, in a strong country, to do good things, but, unfortunately, the times are what they are."

"I mean something different. It is a big mistake to believe that a war is a drug or an incentive to work for many people. This is absolutely not true. The more you immerse yourself in what is happening, the more terrible a crisis or an accident appears to you, and the more you want to go back to an environment, in which you can experience normal human emotions and simple comforts. I very much value every minute that I spend with my family in the suburbs."

"You understand the value of life, how fragile and weak it is. We value what we have, but it turns out that we need to cherish and protect what we have."

"Indeed, this is one of the problems of post-war generations. People take peace for granted, and many forget that it is our duty to keep this peace alive. One needs to learn to appreciate every second of living in peace."

"How to explain it to those who, fortunately, did not experience war?"

"My grandmother explained it to me in a very simple way. I studied during the 1990s, and those years were incredibly difficult for us. I lived with my grandmother, and one day I came home desperate and started complaining of the life that we had to live. She told me that everything can change because everything depends on you. The most important thing is not to live in times of war, because you can change everything else, but not war. In times of war, the only thing that people need is peace. My grandmother taught me to look at life differently. All we need is peace."

"You have all the latest information from hotspots around the world. It seems that a half of the planet is already on fire. How do you live through these tragedies?"

"This is a very big problem. I cannot alienate myself from all this. During the recent hostage crisis in Mali, we were working all night. Such moments give you the feeling that all victims are here near you. When you have this job to do, you can not just change the channel. You must constantly be informed of what is going on, no matter how dreadful events may be.

"When terrorists attacked Paris, we were in Austria. I was commenting on Russia's reaction to the attacks in the French capital the whole night, we were monitoring the information about Russian citizens in Paris - there was a lot of information coming, and the following day a part of me was lost in that tragedy."

"I understand that you have an extensive experience and authority to promptly give answers to various issues. Yet, there are definitely some issues that you need to clear up in advance with your administration."

"Where is that line? How do you understand what you can say for yourself and what you are not ready to say?"

"First and foremost, one needs to double-check facts, because anything can happen. In Paris, some people took firecrackers for a shootout, and the chain reaction started right away."

"How fast can you receive either a confirmation or a refutation of information?"

"It can be different, but, of course, we have direct contacts. In the past, there was a rule that without a decision from top, one did not have to say anything. Today, I can see now this model is becoming history."

"We take comments from experts all the time, but having an official comment from a ministry is very hard."

"You know that this can not happen immediately. We need a new system of interaction. Social networks, for example, work like ice-breakers that break information blockade, especially if we have something to say to the West."

"What is the tragedy of present times? Or maybe this is not a tragedy, but rather healing? Tragic, healing maybe? We talked about Syria four years ago. We were objected to and there was counter-propaganda conducted against Russia. Where are we now? Listen to what European officials say. You can compare their present-day statements to what Russian officials said three years ago. You will see that what they are saying now is a blueprint of what Russia was talking about before. This relates to international terrorism, the Islamic State, Jabhat en Nusra, to joint efforts to combat terrorism - all of that. I want to know where Western officials were three years ago."

"This is all just plain talk - will there be action?"

"We have witnessed seven terrorist attacks in one day in the center of a prosperous European country, in the heart of European tourism. Everything that we have seen shows that the transformation of European consciousness began with the influx of refugees, when they realized that if they do not let the information about the Syrian conflict in, then those events will move to the European continent.

"At first, Europeans were listening to what their officials were telling them. Afterwards, they saw all those people at their doors. Those people started living next to them, they started exploding them, and it will be impossible to go back to the consciousness of the past."

"Do you think Europe realizes this? Everyone quotes Putin's words: "Do you realize what you have done?" Yet, it appears that they do not realize."

"By the end of December, Europe will take a million refugees -  just for this year. The question is what kind of people Europe is taking - all of them come without documents. How many of them are refugees that are running away from horrors of war, and how many of them have extreme thinking and extremist ideology? No one knows that.

"Politics is a game, but one should never play too much of it. For four years, we were told about the Arab Spring, about democratic reforms, about the people who want to finish off the bloody regime. At the same time, they were deliberately turning a blind eye to extremists and terrorists. This is a terrible game, and we all can see what it leads to.

"It is very important to publicly convey the idea that what we see today is not the Islamic State - this is a pseudo-state. What we see is not Islam - this is bogus Islam. What we can see is extremism and terrorism that is in no way associated with true values ​​of the religion, the history of which counts many hundreds of years."