US to face worst droughts for 1,000 years

Recent research which takes into account climate models, published in Science Advances, indicate that the United States of America may face its worst droughts for one thousand years over the coming century. The areas predicted to be most at risk are the US Southwest and the Great Plains and the droughts are predicted to last for decades. 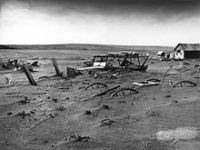 The research was published in Science Advances, in the edition of February 12 and has been reported in Nature magazine (*). The study takes into account historic drought cycles in the United States of America and forecasts what will happen over the next hundred years in long-term projections extrapolated from the data.

The results are alarming. Experts predict that the forthcoming droughts could be worse than the mega-drought registered seven centuries ago, which destroyed a civilization, the Pueblo peoples, and could be the worst severe climate event to hit the USA in a thousand years. The research work was carried out by the Goddard Institute for Space Studies of NASA and was led by Benjamin Cook, who states that "These future droughts are not only going to be bad compared to what we've experienced over the historical period, but also really bad compared to the past millennium."

In conducting the research, the team examined tree rings which register data on precipitation and temperatures, and studied the results from seventeen simulated climate models, which they see predict a trend towards a "fundamentally drier state" for the South West and the Great Plains. Another indicator was registers of soil moisture, called the Palmer Drought Severity Index, taking into account temperature projections and also humidity and energy from sunlight, providing projections that are far more accurate than ones based only on temperature.

The research was described by paleo-climatologist Kevin Anchukaitis, of the Woods Hole Oceanographic Institution, Massachusetts, as "the first convincing demonstration I've seen that it is both possible to seamlessly connect past, present and future, and to then be confident that they are on comparable scales."

The conclusions of the research were based upon two given scenarios: firstly, the precept that Greenhouse Gas emissions will remain constantly high and secondly, that major Greenhouse Gas emissions would be reduced sharply. Taking both possibilities into account, the models showed severe incidences of drought in the second half of this century, between 2050 and 2099.

Today, California is undergoing a serious drought, which has existed for several years. The South West of the United States of America has experienced drought for over a decade.