Christmas traditions in Russia live on 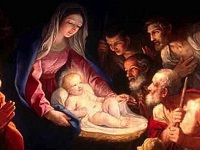 Originally, in most of Europe, presents were given on Saint Nicholas' Day, 6th December. However this was changed when in the 4th century AD, Pope Julius I (337-352) fixed the 25th December as the date of Christ's birth because it coincided more or less with the Roman festival of Saturnalia and the Pagan Germanic and Celtic festivals of the Winter Solstice on 21st December. The habit of building nativity scenes to celebrate Christ's birth began in the 13th century.

Orthodox Christmas is a national holiday in Russia

The Orthodox Church then started celebrating the birth of Christ on the day of Epiphany (day of adoration, 6th January), when the Three Kings brought presents to Jesus in the stable - because according to the Julian calendar, Christmas is out of phase with the Gregorian (Western) calendar by 2 weeks. This is the day when Christmas is celebrated in Russia but the one who brings presents is Ded Moroz (Grandfather Frost) and Snegoroushka (the Snow Girl). Ded Moroz is maybe the original Father Christmas, with his long white beard and long tunic-like clothes.

In Russia, Christmas Eve is celebrated with various typical dishes, in a family reunion and in some houses, places set at the table for family members who died. The meal (the Holy Supper) is large, because it ends a period of fasting. However, meat is not eaten. The party begins when the first star appears in the sky. On the table, a white cloth, symbolizing the white swaddling cloth around the baby Jesus. Some people place straw around the table to symbolise simplicity, evoking the manger where the baby Jesus was born. A candle is lit in the centre of the table (the Light of Christ). The Christmas Tree (Yolka) is decorated before the meal.