Anniversary of a massacre

It's been now a century and a half from the river Sand Creek's massacre and its memory, gradually more and more away, remains in the memory of the generations that follow. It has been widespread and deeply rooted in, unable by nature to lose all its cruel absurdity. 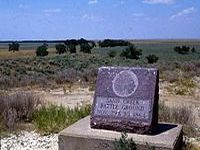 At dawn on November 29, 1864, a contingent of the US Army attacked the Cheyenne and Arapaho tribes camped at a bend of the river Sand Creek, where they were to spend the winter. Six hundred old men, women and children. Almost all of their warriors was elsewhere, far away to hunt bison.

To attack these defenseless, seven hundred soldiers of the US Army, under the command of an anything but gallant Colonel Chivington, another who had never hidden his contempt and hatred for the Native Americans.

As will show the subsequent investigation, many of the soldiers were drunk and without discipline, because recruited quickly between groups of volunteers who chose Indian territories instead of fighting on the front of the Civil war, then in full swing.

It was not a clash between the braves, like others in the history of peoples but of a carnage in the name of hate and senseless unscrupulous expansionism.

Whites wanted certain territories, certain deposits, certain trade routes. The Indians were an impediment and were treated according to a script staged yet many times, in many other parts of the world.

Because the Indians were camped right there? Because they had received assurances that they would not be in danger.

Why had they trusted? Because the relationships with the Whites, despite some ups and downs, were after all peaceful and had been signed treaties apparently always respected.

The oldest Indian leaders probably understood that the natives could not anything against the military power of Whites and tried to save the situation, showing themselves loyal, respectful, friendly. They were wrong.

At dawn on November 29, 1864, Cheyenne and Arapaho understood well how nothing was worth the word of the White Man.

Who understood well was White Antelope, 75 years' old Indian chief: he ran to the soldiers with his hands up finding then himself killed, mutilated in the body by knives. Nose, ears, fingers, genitals were used as trophies.

Who understood well was Left Hand, Indian chief who faced the soldiers as still, shouting that he will not have fought them because they were friends. He was killed as White Antelope.

Who understood well was Black Pot, oh! If he understood well! He was perhaps the most available between the Indian leaders. The Whites had given him an American flag and he did gather his people around the pole that supported it. He was sure that they would not be killed under such protection. He was wrong. He managed to get to safety but he was wrong.

Who understood well were all the women past with bayonet, all infants quartered in place and all those left to die along the way back by the soldiers who had taken them.

Who understood well that day were all those who find themselves in danger of death, injured or dead and, as dead, without parts of their body. Men or women who were. Because even in death, their bodies were desecrated and, from them, soldiers took pieces that ended to adorn hats, saddles, clothes.

They understood well that the America's word is worth nothing and if it is respected is only because the opponent has dealt from a position of strength and can charge expensive the betrayal.

But it is fair to acknowledge one thing. Do not know how, do not know why, the US Congress condemned without appeal the attack operated by Colonel Chivington. To the harsh words of condemnation, however, did not follow any punishment. On the contrary: at least one prosecution witness was killed without even his murderess was punished.

Chivington died a natural death in 1894 after finishing his career in the military and after a very long tenure as sheriff.

There was no justice for the massacre at Sand Creek and all the other massacres that followed it, one after another, destroyed the Indian tribes almost erasing from history.

Recently there have been an apology from the US government. But who benefits? Those which would be granted by law, are no more. Will never come again.

As someone wrote after the death of former dictator Videla, the hell is not enough.

I cannot imagine a divine punishment so terrible to embarrass what is already in itself a terrible punishment from God. But I hope there is it.

I hope for the innocents massacred at Sand Creek. And for all the other.