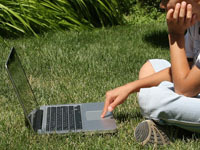 Nobody would dispute that the internet allows information to be distributed for mass consumption at the click of a mouse. In this way, it has changed our lives for the better. However, like everything, it can be abused. One example of this is the now common practice of trolling. Wikipedia defines a troll as "a person who sows discord on the internet by starting arguments or upsetting people, by posting inflammatory, extraneous, or off-topic messages in an online community (such as a newsgroup, forum, chat room, or blog) with the deliberate intent of provoking readers into an emotional response or of otherwise disrupting normal on-topic discussion." Nowadays, we tend to associate trolling as vitriol directed at a famous person.

In our celebrity obsessed society, some people focus their anger on those, whom many of us idolise. While some will maintain that celebrities are fair game for criticism as they are in the public eye, they are often subjected to cruelty, which we mortals would not tolerate. It goes without saying that threats of physical abuse are unacceptable. Yet, celebrities face these regularly because of the internet. Hardly a day goes by without us hearing reports in the media of someone famous having to endure such ill-treatment on his Twitter and/or Facebook page(s). Some celebrities decide to ignore these threats, others respond to them and a few report them to the authorities.

Of course, malice has different faces. For example, it is arguable that placing a comment on the Twitter page of an ethnic minority celebrity that he should be deported to his country of origin, would be nearly as insidious as a threat of physical abuse. The challenge that we face is respecting a person's right to freedom of speech while condemning any threat of physical abuse. U.S.A. has managed to do this well through the U.S. Constitution. The First Amendment to the U.S. Constitution guarantees freedom of expression. As a result, rallies of the Ku Klux Klan, an allegedly racist organisation, are permitted to take place. Police officers are naturally present at these gatherings. In U.S.A., a person is entitled to voice his opinion however repugnant it may appear to be, as long as no human being is threatened with physical abuse by it.

The internet allows strangers to communicate openly with each other. As such, a threat of the abuse described will always occur. It will not be eradicated until legislation is introduced that make its posting as serious as a similar offence committed outside cyberspace. At the moment, the perpetrator of this wrongdoing possibly thinks that the worst that would happen to him is that he would be given a warning. This cannot not be right. The fact that the threat of physical abuse comes from a faceless individual rather than from a real life altercation, does not make it any less menacing!

As for the trolls, their passion obviously needs to be used in more positive ways. They could think about making a career out of it and become journalists. If they did this, they would not be prohibited from airing their views on their celebrities of choice. Further, they would confound the cynics, who say that only prison can rehabilitate offenders as the trolls would reform themselves. Famous people are like everyone else: they need to be held to account.

As long as you are making fair comments about them on matters of public interest, where's the harm?