Russian President Vladimir Putin reminded the world of his "machismo" as he made a polite gesture (from the European point of view) at the APEC summit in China. However, Putin's act was unacceptable from the point of view of Chinese conduct.  Putin wrapped Xi Jinping's wife with his blanket at the moment, when the Chinese president was talking to US counterpart Barack Obama. Chinese censorship removed the video of Putin's gesture and declared it secret, but it was impossible to avoid the leak. 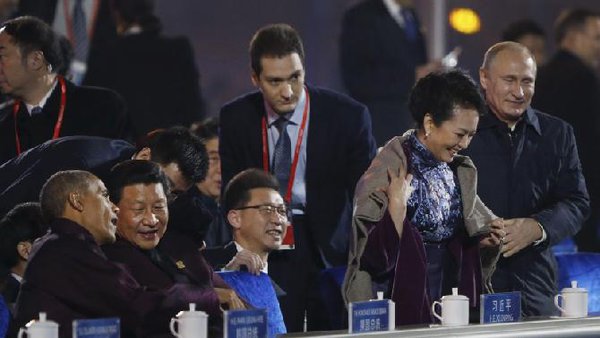 Some foreign publications, writing about the incident in China, believe that Putin's courtesy should be added on the list of the things that must be excluded at diplomatic dinners. With his token of attention for Xi Jinping's wife, Vladimir Putin broke the unwritten rule of diplomacy "never to touch the wives of diplomats" as he wrapped his blanket around the Chinese leader's spouse.

The incident took place in China, with the participation of a Chinese female. Residents of China are known for their high sensitivity to being touched. They do their best to avoid being touched by strangers, especially foreigners. For example, many tourist guides to China recommend foreign tourists not to touch the Chinese. Moreover, Chinese women experience a physiological aversion to tactile signs of attention from outsiders. Therefore, hugs, pats on the back and other bodily contacts are completely unacceptable. To crown it all, despite gender equality in China, it is impermissible for men to touch women and commit acts of common politeness, such as assisting a woman in putting on her coat, opening a door in front of her or offering her a seat.

To enjoy fireworks at the stadium that was built for the 2008 Olympics, Putin was seated next to China's First Lady, who was sitting next to her husband, President of China Xi Jinping. At some point, Putin stood up, took a brown blanket and wrapped it around his neighbor's shoulders. The lady smiled and thanked the Russian leader for his attention. Xi Jinping at the time was busy talking to his US counterpart Barack Obama and did not see the Russian president taking care of China's First Lady. Peng Liyuan immediately threw the blanket to her bodyguards and put on a black jacket.

Foreign Policy assumed that Putin offered his blanket to China's First Lady in response to her attempt to start a conversation about the weather. Other publications recalled that the head of the Russian Federation announced his divorce last year and came to China a lady. The incident with the blanket was quickly dubbed #coatgate. German Die Welt assumed that the Russian president had been staying without female companionship for too long. Britain's The Daily Mail, on the contrary, suggested that Putin tried to charm the hosts of the event. Chinese website Guancha wrote that the sign of attention was a common one for Putin: he did the same for Angela Merkel at the G20 summit last year.

However, most Chinese were shocked with Putin's act. China's state television CCTV, commenting on the meeting, said that Putin deliberately touched Peng Liyuan, wrapping his blanket around her shoulders. The video began spreading on the Internet speedily, and many Chinese started discussing the incident on Weibo, the Chinese version of Twitter. Some suggested the official Beijing should make communication with the Russian president more familiar.

Chinese Internet censorship joined the scandal soon afterwards. The videos and stories about the Russian leader touching China's First Lady, started to disappear. However, some of the videos leaked on YouTube. Western media, commenting on the scandal, noted that Beijing's desire to focus international attention on Xi Jinping as the host of the APEC summit was not the only reason, for which censors were on high alert. China's state-run media are tightly controlled by the authorities that carefully protect the reputation of the Chinese administration. In addition, China continues its massive anti-corruption campaign. Given the growing economic and military ties with Russia, even the smallest hint of a special relationship with the Russian leader is inappropriate. Noteworthy, some sharp-eyed observers noted that Japanese Prime Minister Shinzo Abe was watching the fireworks from the back, while his colleagues were chatting friendly in the foreground.

Putin always tries to be a gentleman, but sometimes circumstances are stronger than him. The Russian president is known for his late arrivals for official meetings. The list of the personas, who had to wait for Putin, includes the British queen, the Spanish monarch and his wife (the latter had to wait for Putin in the cold), the King of Sweden and the President of Finland. In 2001, he was late for Easter service, and the patriarch had to exclaim "Christ is risen!" at the Cathedral of Christ the Savior ten minutes later.

As for recent events, in October, the Russian president was late for a meeting with German Chancellor Angela Merkel.

Noteworthy, at the APEC summit in Beijing, Vladimir Putin touched not only the wife of the Chinese president, but the US president as well: the Russian leader tapped Barack Obama on the shoulder.