In late August, the Russian Federal Service for Consumer Rights Protection (Rospotrebnadzor) launched multiple inspections of McDonald's fast food chain across Russia. The results of those inspections prove to be disappointing. As of mid-September, 17 percent of 228 samples of McDonald's food did not meet regulatory requirements. Eighty administrative cases have been filed so far in connection with the inspections. This is a serious number, given the fact that McDonald's has 430 restaurants in cities of the Russian Federation. 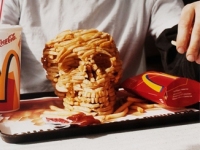 What does it mean when translated into plain language? For example, advertisement of a product indicates a certain percentage of fat or sugar, but the percentage is a lot higher in reality. Some ingredients that are usually referred to as "identical to natural" (that is artificial additives) can be ignored. As a result, a person eating such food may face excessive weight problems at best, let alone allergic reactions to synthetic products.

As for "security requirements," the state of affairs is much more serious. Most often, these words stand for violation of terms of storage of freshly prepared or frozen semi-finished foods. In such products, dangerous bacteria, such as salmonella, may multiply speedily. This, in turn, may lead to food poisoning and salmonellosis.

All of the above is an opinion of sanitary doctors - specialists with deep knowledge on the problem. What do common Russians think of the McDonald's situation?

As it turns out, the opinions of many Russians coincide with those of experienced specialists. This is evidenced by recent opinion polls conducted by All-Russian Opinion Poll Center (WCIOM).

The overall negative attitude is 49 percent. Only a third of respondents expressed positive opinions. It is worth noting that the number of the latter declined considerably (45 percent six months earlier), which can be explained with USA's recent strong anti-Russian stance. Forty-seven percent of the polled Russians see political background in the inspections of McDonald's in Russia. Thirty-three percent believe that the inspections are conducted purely for medical and sanitary purposes.

When sociologists tried to clarify the reasons for closing McDonald's in Russia, 12 percent of the polled said that this should be done in return to USA's sanctions. A bit more than 20 percent supported the initiative out of patriotic, rather than anti-American beliefs: "one needs to develop domestic catering." Forty-one percent said that McDonalds food is "harmful and vapid."

As for the popularity of fast food in today's world, modern science gives a very simple explanation to it. The main reason for this strange, at first glance, phenomenon is the fact that most nutritious food appears to be most appetizing. Since ancient times, the human body has been programmed to eat "for future use," given possible hard times and physical activity.

In modern times, when neither famine, nor physical activity appears to be a danger to city residents, the ancient stereotype becomes dangerous indeed. Fast food entrepreneurs use this peculiarity in their businesses to feed hungry people French fries, high-calorie cakes and sweet drinks that makes customers drink and eat more.

Of course, fast food style of eating may well be justified in some cases. Fast food comes in handy, when a person travels far from their place of residence, for example. Nevertheless, it never occurs to anyone to eat burgers most of the time.

Closing McDonald's restaurants in Russia will not solve the problem of healthy diet. People will simply switch to other fast food chains. The best solution would be to restrict fast food as a phenomenon in the country. In Soviet times, when there was no fast food at all, public catering was based on the following formula: first course, second course, salad, fruit drink.