Vladimir Putin, for his birthday on October 7th, will take a day off for the first time in 15 years. Putin will mark his birthday in the Siberian taiga, his official spokesman Dmitry Peskov said. 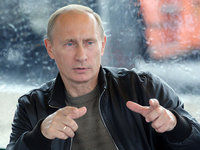 "He is flying to Siberia tonight, to the Siberian taiga. This is a place somewhere 300-400 kilometers far from the nearest settlement," Peskov told Interfax.

The route was chosen for logistical reasons: on Wednesday, Putin has scheduled activities in the Siberian Federal District, Vesti.ru reports.

Putin's spokesman declined to clarify any other details of the president's stay in Siberia on October 7th. "It will be just a day off," said Peskov. He did not respond to specific questions of whether Putin was going to do fishing or hunting.

According to ITAR-TASS, this is the first time in more than 15 years, when Vladimir Putin took a day off serving at top government positions.

Peskov did not name any people, who were going to travel with Putin and whether the president's press secretary was going to be there too. "This year, Putin has not just a busy work schedule, but an extremely busy one, at times close to around the clock work schedule." That is why the president decided to make a short stop in the Siberian taiga.

"Of course, many people will congratulate Putin on his birthday - all relatives and friends, as is customary in ordinary families," said the spokesman. He added that all those who want to, will be able to either call the president, or send a telegram to him. "Each year, we receive a lot of congratulatory letters," said Peskov.

In 2000, Vladimir Putin celebrated his first birthday as president (48 years old), in Pavlovsk, a suburb of St. Petersburg. He received congratulations from the leaders of the city and the region, actors Kirill Lavrov and Mikhail Boyarsky, artistic director of the Mariinsky Theatre, Valery Gergiev, judo coach Anatoly Rakhlin, Rector of St. Petersburg State University Ludmila Verbitskaya, Dean of the Law Faculty of the St. Petersburg State University Nikolai Kropychev, rector of the Mining Institute Vladimir Litvinenko and others. According to media reports, the birthday dinner was held at a Russian cuisine restaurant. Afterwards, Vladimir Putin had a meeting with World Bank President James Wolfensohn, and then attended the premiere of Pyotr Tchaikovsky's opera "Mazeppa" at the Mariinsky Theatre.

In 2001, Vladimir Putin celebrated his 49th birthday with his family in his suburban residence in Novo-Ogaryovo.

In 2002, the Russian president marked the 50th anniversary in Chisinau, where he took part in the work of the summit of the Commonwealth of Independent States (CIS). After the talks, the leaders of CIS countries were invited to dinner at the Russian Embassy and also visited the Krikovskiye basements, where collectible Moldovan wines are stored. In the evening, after returning to Moscow, the Russian president gave a dinner, to which the head of state invited members of the Russian government, leaderships of the Federal Assembly, higher judiciary, prosecutors, law enforcement agencies, senior military leaders, the president of the Russian Academy of Sciences and other prominent figures and officials.

In 2003, Vladimir Putin celebrated his birthday in St. Petersburg. The banquet was held on a boat. It was attended by, among politicians and government officials, Director of the Hermitage Mikhail Piotrovsky and Director of the Russian Museum Vladimir Gusev, actors Kirill Lavrov and Mikhail Boyarsky, singer Alexander Rosenbaum, a school teacher of Russian President Vera Gurevich, judo coach Anatoly Rakhlin and others.

In 2004, on the occasion of Vladimir Putin's birthday, an official dinner was given in Strelna (the Leningrad region), at Konstantinovsky Palace residence. According to media reports, honorary citizens of St. Petersburg were invited for the party - Kirill Lavrov, Igor Spassky, speaker of the city parliament Vadim Tulpanov, envoy Ilya Klebanov and others.

In 2005, Russian President met in St. Petersburg with leaders of Kazakhstan, Kyrgyzstan, Tajikistan and Uzbekistan on October 7th within the scope of the work of Central Asian Cooperation Summit. Afterwards, the leaders of the summit were invited for solemn breakfast at Konstantinovsky Palace. Actor Kirill Lavrov, as well as St. Petersburg Governor Valentina Matvienko and Chairman of the City Legislative Assembly Vadim Tulpanov attended the event. In the evening of the same day, Vladimir Putin held talks with German Chancellor Gerhard Schroeder.

In 2006, Putin celebrated his birthday in St. Petersburg again.

In 2007, for the 55th anniversary, Vladimir Putin invited permanent members of the Security Council, the military leadership of the country (including commanders of units of the Armed Forces and military districts), officers and members of those servicemen, who were killed in the line of duty. The celebrations were held at the Ekaterininsky Hall of the Grand Kremlin Palace in Moscow. In his speech, the President said: "Today we are not summing up results, this is not a meeting or an award ceremony. Today, I am meeting with people, whom I deeply respect."

In 2008, on 7 October, Prime Minister Vladimir Putin had a working trip to St. Petersburg. At Konstantinovsky Palace, he took part in the presentation of the film "Learning Judo with Vladimir Putin." Afterwards, he attended the 77th session of the General Assembly of Interpol (which was first held in Russia), held a meeting on the development of the national film industry, and visited the new complex of protective structures of St. Petersburg . A few days later, on October 10, the Prime Minister showed reporters an Ussuri tiger cub,  which was presented to him for his birthday. The tigress, named Masha, was then transferred to the "Safari Park" in the city of Gelendzhik, in Russia's south.

In 2010, during his 58th birthday, Putin was in St. Petersburg, where he participated in a meeting on the implementation of programs for the development of universities.

The day of October 7, 2011, Vladimir Putin was in Moscow. On that day, he spoke at a meeting devoted to the issues of the military and industrial complex.

In 2012, Vladimir Putin turned 60. At that time, he served as the president again. His press secretary, Dmitry Peskov, said that Putin was going to celebrate his anniversary in St. Petersburg, in the circle of his family and friends. The head of state had no meetings planned during that day.

On October 7, 2013, the Russian president was on the Indonesian island of Bali, where he arrived to attend the summit of the Asia-Pacific Economic Cooperation (APEC). According to the press secretary, Dmitry Peskov, "Putin's birthday would be a working day". Prior to the plenary session, APEC leaders congratulated the Russian president on his birthday. The host of the meeting, President of Indonesia Susilo Bambang Yudhoyono, sang a song, playing a guitar. Japanese Prime Minister Shinzo Abe gave Putin sake; Chinese President Xi Jinping gave his Russian counterpart a cake.