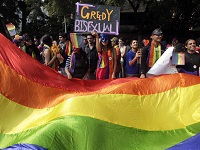 "Victory for tolerance in Europe", said Austrian president Heinz Fischer, referring to Conchita Wurst's triumph at Eurovision Song Contest. However, people with more conservative system of values didn't share his enthusiasm. It has already become a cliché to argue that the victory of Conchita Wurst wasn't merely an accident but a symbol of European moral decadence. "The ancient definition of democracy had nothing to do with a bearded woman, but with the leadership of people," Russian Railways CEO Yakunin said.

These days Russia has a reputation of defender of traditional values. In June 2013, the Russian parliament passed a law banning gay propaganda among minors. The law was adopted to prevent the distribution of ideas relating to "non-traditional sexual relationships."

Instead of simply criticizing LGTB people themselves, it would be a more reasonable way to prevent the population from undesirable liberal ideas by educating people about negative consequences of homosexual marriages.

In 2012, sociologist of the University of Texas at Austin, Mark Regnerus, agreed that Putin's antigay policy was not unfounded. He argues in 'Social Science Research' journal that young adults, who were raised in families with same-sex parents, were far worse in comparison to those who grew up in heterosexual families.

Some of the observations he makes in his study are that children from 'same-sex parents' are more likely to suffer from depression, be unemployed or arrested. According to the research, "only 8% of IBF (intact biological family) children said they were currently unemployed, while 28% of LM (lesbian mother) children said the same. Also LMs were more than twice as likely - (8 % vs. 19%) - to report being currently (or within the past year) in counseling or therapy ''for a problem connected with anxiety, depression or relationships.''

It is worthy of note, kids from homosexual families were more often exposed to sexual abuse by their parents than those from IBF. 23% of LM children said yes when asked whether ''a parent or other adult caregiver ever touched you in a sexual way, forced you to touch him or her in a sexual way, or forced you to have sexual relations,'' while only 2% of IBF children responded affirmatively.

He also claims that children of homosexual parents are more likely to have same-sex relationship. Statistics shows that the number of those who identify themselves as entirely heterosexual is essentially lower among kids from 'same-sex parents' (61% vs. 90 % of respondents from IBFs). He argues against previous studies asserting that family structure doesn't affect children's sexual orientation.

In response to his study some scholars, who seemingly support homosexual values, accused the brave sociologist of being charlatan. However, an investigation that was initiated by the University of Texas concluded that there was no evidence of scientific misconduct in Dr. Regnerus's study.

Coming back to the problem of aggressive discrimination against sexual minorities, it is easy to stigmatize gays. However, it does not help either to make fun of them or make homosexual individuals be an object of general abhorrence. It might sow seeds of violence which already happened in Russia.

At the same time, the ultra-liberal idea asserting that being homosexual is completely normal is another extreme. It would be useless to mention its nature and nurture debate. But if being homosexual is indeed, normal, try to give reasonable explanation to the deplorable reality of those young adults who grow up in same-sex parents' families. We can keep denying the fact that family structure matters, but we cannot ignore the statistics demonstrating that quality of life of IBF children is significantly better than those of homosexual families.