Thousands of Muscovites, human rights activists, representatives of political parties, public organizations and other people honored the memory of those killed and executed in the Donbas of Ukraine. The people gathered for a public meeting in Moscow to mourn the memory of the victims of the civil war in Ukraine. The meeting was held on September 27 on the Poklonnaya Hill, near the "Tragedy of Peoples" monument. 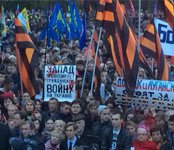 The event, organized by "Mothers of Russia" and the National Parental Association, brought together as many as 17,000 people, officials at the Central Directorate of the Interior Ministry in Moscow said.

The police even promised to punish the organizers of the meeting for the fact that the actual number of participants of the meeting in memory of those who died in the Donbass of Ukraine was almost six times larger than was officially announced.

According to the UN, during the civil war in Ukraine, because of the actions of the punitive troops, as many as 3,500 civilians were killed. In addition, on the outskirts of Donetsk, several mass graves were found, in which "the bodies of civilians, including women," were discovered along with the bodies of captive militia fighters and soldiers of Ukrainian troops.

According to media reports, they were shot in the head at close range. The territory, where the graves were discovered, was controlled by Ukrainian security forces and National Guard Battalion Aydar. Militias already found more mass graves in the region. The Russian Foreign Ministry, representatives of the Russian parliament, public and human rights organizations demanded an international investigation be conducted into the tragedy.

The victims were brutally executed and thrown into the pit to be subsequently buried. World War II veterans said that Nazis were exterminating the civilian population of Ukraine similarly.

Photos and video reports from the meeting in memory of victims of the Ukrainian civil war show that people came with homemade placards calling on Ukraine to come to its senses. Many people came wearing St. George ribbons, carrying flags of the People's Republic of Donetsk. Many were crying as they were lighting candles and carrying flowers to the "Tragedy of Peoples" monument.

Veterans of the Afghan war, people of Donbass and others spoke to the participants of the meeting. Children read out blood-chilling poems about their schoolmates and neighbors dying in the streets. The orators reminded that international organizations silenced the crimes and did not agree to investigate them.

Opposition leaders flatly refused to mourn and honor the memory of those killed and executed in the Donbass region. Violetta Volkova, an opposition activist,  according to participants, joined the meeting, having put on a St. George ribbon. In response, her former colleagues and associates said that they should have delivered her for experiments with electricity in 2012, apparently, as it appears, to kill her with electric shock, as their idols similarly did in Odessa ...

Publicist Andrei Prokhanov accused Ukraine of nurturing fascism. "If we don't stop this, we will find these mass execution sites near Paris, Warsaw and Berlin," he said. "Theatre of fascism requires parade of tortures," he concluded.

Before the end of the action, a child came up to the symbolic bell of memory and tolled the bell to mark the opening of the minute of silence.

Organizers of the meeting "Donetsk: Innocently Murdered" said that they were very grateful for the massive response to the call to honor the memory of the innocent victims in the Donbass.

"Despite the cold, rain and a day off work, people came to the meeting, which means that they have a heart, they have a soul," one of the organizers of the event, co-chairwoman of the National Parental Association, Elena Tretyakova said. She said that organizers would be ready to pay the penalty for exceeding the number of participants of the meeting.