The boy William Verdún was born with a severe sickness: his organs increased above the normal size, so he could not see, hear or even get around, being fed all the time through a dietary probe. His health conditions led to his death with only 10 months of age. 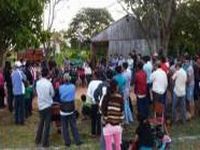 In the same community, there were the deaths of sisters Adelaide, of three years, and Adela Alvarez Villalba, just six months old, last July. According to residents, the attending physician hastened to report that the deaths were due to have a lung infection or acute respiratory failure in children, and the laboratory results would come only after a month.

In this region in recent days, at least 30 people, including many children, have been hospitalized with the same symptoms that the deceased two sisters had: vomiting, fever, headache, stomach ache and nausea. Nearly 400 animals were found dead in a situation which is still unclear.

The cases were recorded in the farming community of Huber Duré, where about 260 families, distributed in six housing units, with an area of 2000 hectares are living. The colony of the National Peasant Federation (FNC) of Paraguay located in the monoculture agricultural area - mostly soy, whose land is sprayed intensively with pesticides.

In winter, however, soya is not grown, but the soil is prepared by applying Carbamate, a highly toxic chemical compound used in insecticides. For the population, problems began to emerge about 10 years ago when they started mechanized plantations on the outskirts of the community.

According to the doctor who assists in the community health care, the native population presents many cases of digestive diseases, contact dermatitis, dermatophytosis fungus, and bacterial pyoderma in children up to five years of age. For a resident of the community, the increase in the number of diseases in the region could be linked to the operation of the community water pump, damaged after a lightning strike, which forced the community to fetch water in a pond, the Blue lake, for at least three months.

Despite the cases of illness and death, the Paraguayan government was not taking appropriate measures to ensure the health of that population. After pressure from residents, through protests and denunciations in the media, the authorities sent to the town officials of two organs of the Ministry of Health: SENAVE, institution responsible for controlling the application of remedies against pests, and Senasca, responsible for animal health. Among the consequences of the lack of official support is the intensification of feelings between the communities of farmers and large landowners, a relationship already marked by violent conflict.