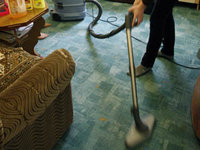 People of Europe, or to be more precise, citizens of the EU, were left speechless after hearing or reading the news on the 1st of September 2014. It seems that we now have to forget the widening wealth gap, massive unemployment in Spain, Italy, Greece and elsewhere, budget cuts and the suffering of civilians in Ukraine. Forget all of that. According to the website of European Commission (EC), we are now facing far greater threat, a threat which comes from our monstrous dust-sucking vacuum cleaners that became far too powerful for peaceful coexistence.

Apparently, our unelected Solomons from Brussels have decided that from 1st of September 2014, our vacuum cleaners cannot exceed rated input power of more than 1600 W, while the annual energy consumption must be less than 62,0 kWh/year.

Probably, these measures are designed by EC "High Command" only to prepare us, poor mortals, for a real war with vacuum monsters and other domestic appliances in 2017, when the maximum rated input power will not be allowed to exceed 900 W. Can you imagine an efficient 'dust sucker' at 900 W? I can't.

Now let us leave the above-mentioned figures alone and focus on other dimensions of these 'nature saving' measures.

Officials from the EC like to wrap such regulations in a muddle of "preventing", "global warming", "sustainable development" and similar words, hoping that the new rules will find justification in the eyes of the general public. But the ordinary people are not so stupid any more. They understand that such "green" directives are nothing less than the communist style decrees that must accustom people to gradually increasing control, limit their right to choose, and other freedoms.

The ignorance of the decision makers and a lack of common sense is breathtaking. Wasting of time and resources on such "rain tax" type of regulations, while the European Union is gripped by the colossal internal problems and humanitarian disasters on its borders, is utter disrespect towards the citizens of 28 member states. It is also a plain demonstration that the political elite is either out of touch with reality or unable to face and solve the real challenges and issues.

European Commission can be compared to the head of a cartoon ostrich which is head buried safely in to the sand while the body and especially the backside (ordinary people) are exposed and vulnerable to kicking. And just when you thought that such an imaginable sight could not be more ludicrous, Brussels comedians had a nerve to announce that they were leading the world.

Thank God, there aren't so many followers.