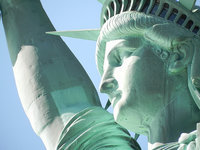 F*** your parliament and your constitution. America is an elephant. Cyprus is a flea. Greece is a flea.

Since 1945, America is a sensitive state. Here to be un-American is a thought crime; elsewhere too nowadays (you are labelled fascist, jingoist, communist, fanatic, etc.). This is why great film-maker Fritz Lang compared Truman's society to Hitler's and decided to get back to his country in order to realize his cinematographic testament. Yet courageous Americans since Thoreau have always denounced the barbarities of their powerful and monstrous country. I was thinking of US marine general Smedley Butler who remarked in his wonderful (and brief) essay on war as a racket:

And let us not forget the bankers who financed the Great War. If anyone had the cream of the profits it was the bankers... At least 21,000 new millionaires and billionaires were made in the United States during the World War.

Then Butler explains us why America entered First World War. He recaps with humour a conference involving western belligerents and the bankers:

The cause of the allies is lost. Now we (the allies) owe you, bankers and manufacturers, five or six billions dollars. If we lose we cannot pay back this money... and Germany won't.

The American bankers wanted their money back. And the Fed had just been created, inflating the American debt from one billion (1898, the year of Cuba) to twenty-five billion (in 1920) then to 16000 billions nowadays! The world had to be safer for democracy that is the debt-system... So Germany had to be vanquished, ruined, torn off but not too much;  in order too to serve the incoming of a future Hitler (as it was written during the treaty of Versailles by French historian Bainville!) and of a new rentable war. As we know too the American bankers helped and financed the Bolsheviks the same year. Poor humanity...

Daily public opinions are brainwashed in France, England, Italy, America, against Putin the new Hitler and Russia the big bear that is swallowing Europe with a new model of invisible Cossacks. Cheap propaganda always works.

Adds Butler on the matter:

There the young recruits were remoulded; they were made over; they were made to "about face"; to regard murder as the order of the day. They were put shoulder to shoulder and, through mass psychology, they were entirely changed. We used them for a couple of years and trained them to think nothing at all of killing or of being killed.

I was studying Oliver's Stone courageous and uncompleted documentary about the untold history of America. Stone insists on the fact that America created ex nihilo its imperialism waging an imbecile and criminal war against Spain - a war prepared too by the newspapers and another false flag attack. Then he asserts that America overthrew tens of regimes in the world and wanted after WWII a cold war against Russia - which has to cease yet! Truman so dropped the murderous bomb on the unlucky and already destroyed Japan in order to impress Stalin. The military-industrial complex was contented.

Let us remind too that Nagasaki was the only town in Japan with a cathedral. Let us remind that American republic recognized in the Tripoli treaty of 1797 that it has no Christian faith!

Art. 11. As the Government of the United States of America is not, in any sense, founded on the Christian religion...

We already knew this trait, thanks.

Yet liver Stone has forgotten that in 1939 Stalin was granted by Churchill and his American associates the right to murder polish officers in Katyn and to invade the Baltic republics. Our moral democratic allies wanted their war only against Germany at this time! And they manipulated the usual idiot, the pushy Poland which was crushed in two weeks by the Wehrmacht. Poland is still voluntary to invade and annihilate Russia this time.

The most abject American president of all - before Nobel prize Obama - may have been Texan Lyndon B. Johnson. In his brilliant documentary, Stone let us discover the great verbal inspiration of that humanist. Johnson (see Johnson's quotes in wikipedia) was talking to an unlucky Greek ambassador:

F*** your parliament and your constitution. America is an elephant. Cyprus is a flea. Greece is a flea. If these two fleas continue itching the elephant, they may just get whacked good ...We pay a lot of good American dollars to the Greeks, Mr. Ambassador. If your Prime Minister gives me talk about democracy, parliament and constitution, he, his parliament and his constitution may not last long...

America is God; the rest of the world is a piece of trash.

Another great documentary had revealed ten years ago the hidden face of America; it was the Fog of war, a series of interviews of dear old McNamara, the man who had bombed Vietnam during five years (three millions forgotten dead), prepared with Johnson the great demographic replacement in America and accelerated the industrial decline.

This is what McNamara recognizes (all these quotes are in the script or in wikipedia), had America and England lost the Second World War:

As we know the madness of the anglo-Saxon empire is connected since Queen Victoria (or musician Handel!) to Israel, the Hebrews and the bible: legend from the lost tribe... This time too this is an inspirited Johnson who gives us the key:

"Our society is illuminated by the spiritual insights of the Hebrew prophets. America and Israel have a common love of human freedom and they have a common faith in a democratic way of life."

Johnson ignored the infamous USS Missouri attack. For these synthetic Hebrews, the Americans, the world is just their promised land. Beware Russia, China and India!

If you are not democratic enough...

Let us be generous with our reader. The Hebrew model was too suggested by George Orwell at the end of 1984:

What was required in a Party member was an outlook similar to that of the ancient Hebrew who knew, without knowing much else, that all nations other than his own worshipped 'false gods'. He did not need to know that these gods were called Baal, Osiris, Moloch, Ashtaroth, and the like: probably the less he knew about them the better for his orthodoxy.

He knew Jehovah and the commandments of Jehovah: he knew, therefore, that all gods with other names or other attributes were false gods.

That is enough for western fanaticism. Some who denounce the Koran should read the bible.

But who needs these global wars, apart from a bunch of re-born lunatics?

And let us not forget the bankers who financed the Great War. If anyone had the cream of the profits it was the bankers.

We are waiting for another war. The American complex terror needs it. In that mess my favourite quote is Le May's:

"If we'd lost the war, we'd all have been prosecuted as war criminals."

At least this mass-murderer had an ounce of lucidity and morality Cameron and Obama do not possess. And they are now accusing Syria of the mess in Iraq...

Oh my Christian God, why did you abandon us?