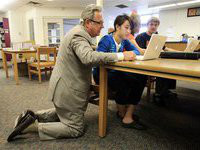 It never ceases to amaze the lengths to which men will go to find love. Some treat this quest almost obsessively. Online dating has encouraged it and is used by men and women, who have understood that they are never going to find the 'loves of their lives' in nightclubs. In this regard, both the sexes treat the task of finding their mate rather like a science, giving dating agencies details about themselves - body particulars, ambitions, likes and dislikes, in the hope that the agencies will match them with a suitable mate. Alternatively, people surf these agencies' websites where they can hand pick the type of spouse they desire from a collection of photographs and profiles.

However, some men have gone 'the extra mile' in the search for their brides. Disillusioned with the selection of women in their countries or coming off painful divorces from women there, they have taken to travelling to find love. Prepared to clear their bank accounts to do so, they travel to South East Asia to meet women assigned to them by dating agencies in this part of the world. During these 'dating holidays', it is not uncommon for men to meet many women in something akin to an interview process for the right to be these men's wives. Of course, there is some romance to it when a man establishes a rapport with the first woman he meets on the trip, often a woman in whom he has shown an interest before meeting her.

More worryingly however, it would seem that some women view their meetings with their dates as opportunities to entice the men to spend their money for the benefit of the women and their families, before any marriage contract is contemplated. This happens when a woman invites the man to her home to meet her family. Once there, the woman's family members make an impassioned plea to the man for money on the grounds of poverty. This is when things go wrong.

It hardly needs stating that the above trips are arranged to countries, which we regard as poor. It then follows that the women in these countries are keen to leave their difficult lives behind them for greener pastures. Their motives are hard to read. Are these women interested in the men because they have the qualities they seek in their husbands or are they with the men for literally a 'passport' to better lives or is it a combination of both? The men, for their part, want women, who can be good wives and possibly mothers, and have chosen these destinations because they provide the best chance for finding such people.

This type of internet dating fails as there is a doubt as to the intentions of the women concerned. While sceptics may say that this doubt exists even in conventional romance when a man meets a woman without the help of the internet, this 'wedding tourism' far from guarantees that to which we all aspire: unconditional love. The men spending such large sums of money are deluding themselves that they are truly obtaining what they crave. It is arguable that they would be better served giving love another shot in their own countries.