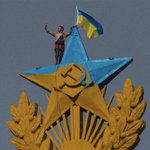 In Moscow, on August 20 overnight, unknown individuals covered the star with paint on top of the high-rise building on Kotelnicheskaya Embankment in blue and yellow colors and hung the Ukrainian flag on the steeple that crowns the building. The iconic building, built during the Stalin era, currently serves as an elite residential apartment building.

A driver, on his way to work in the morning of August 20, noticed the changes in the appearance of the Soviet star on top of the building. For the time being, it remains unknown how the vandals entered the elite 32-storeyed, 176-meter-high building located in the heart of Moscow.

The concierge of the building said that similar incidents have happened before. The building has a lot of technical entrances and exits; perpetrators would get inside  climbing through elevator shafts.

The residential building on Kotelnicheskaya Embankment is one of the seven iconic skyscrapers of the Russian capital. The building was built in 1938-1952 under the project of architects Chechulin and Rostovsky. Lavrentiy Beria, the chief of the Soviet secret police, was curating the construction of the building. In modern times, the skyscraper became famous and prestigious thanks to its residents.

The man, who put up a Ukrainian flag on top of the building, was arrested. He turned out to be a Ukrainian extreme athlete. Reportedly, he is a Kiev blogger and roofer known as Grigory, aka mustangwanted8. Grigory and three other suspects were detained and taken to the police department on Taganka, Lifenews reports.

Blogger, member of the Public Chamber of the Russian Federation Anton Korobkov-Zemlyanskiy told the Russian News Service that the act was most likely committed by Ukrainian roofer Grigory.

"This young man was walking around Moscow in a T-shirt with the coat of arms of Ukraine. I met him by chance on Saturday, he said he wanted to take a walk on the roofs of Moscow, to visit Stalin high-rise buildings and climb to the star, because it's beautiful," the blogger said.

Grigory said that he was a supporter of the punitive operation in the south-east of Ukraine. According to him, he was going to volunteer to fight in the Donbas against his own citizens. "And today, I saw the picture with the flag of Ukraine on the building, and it became clear that it was him," Zemlyansky said.

Grigory was among the suspects, who were brought to the police station on Taganka. However, he posted a message on Facebook denying his involvement in the incident. "Hahaha. This is definitely cool, but, unfortunately, I have nothing to do with it. I was at home for two days," he wrote.

Police opened a criminal case under "Vandalism" in connection with the incident on the steeple of the high-rise building in Moscow. The article stipulates maximum punishment of three years in prison.

Meanwhile, the Russian Foreign Ministry was deeply outraged with the desecration of a monument to Soviet soldiers in Bulgaria.

"We are deeply outraged with the desecration of the burial ground of Soviet soldiers-liberators in Sofia's Lozenets on August 18 overnight. The sculptural composition and the wall with the names of the fallen soldiers was splashed with red paint," the message posted on the website of the Russian Foreign Ministry said.

Moscow sent a protest note to the Bulgarian Foreign Ministry in connection with the incident.